Both Hong Kong Chief Executive Carrie Lam and Beijing have ruled out any further concessions to protesters.

INTERNATIONAL NEWS - Hong Kong's embattled leader arrived for a town hall meeting on Thursday evening, part of a bid to reach out to residents after more than three months of huge, sometimes violent pro-democracy protests.

The public "dialogue session" is the pro-Beijing government's first attempt to sit down with her critics following 16 consecutive weeks of unrest.

Millions have hit the streets, with hardcore activists clashing repeatedly with police, in the biggest challenge to China's rule since the city's handover from Britain in 1997.

"No matter what your stands and opinions are, I believe we have a common goal - for the interest of Hong Kong," chief executive Carrie Lam said in a Facebook post hours before her motorcade swept into the indoor sports stadium where the gathering is taking place.

But it is unclear what, if anything, Lam can offer - or even whether the more hardcore protesters will let the event go ahead without disruption.

Both Lam and Beijing have ruled out any further concessions to protesters, whose five demands include an independent inquiry into police conduct, an amnesty for more than 1,500 people arrested and fully free elections. 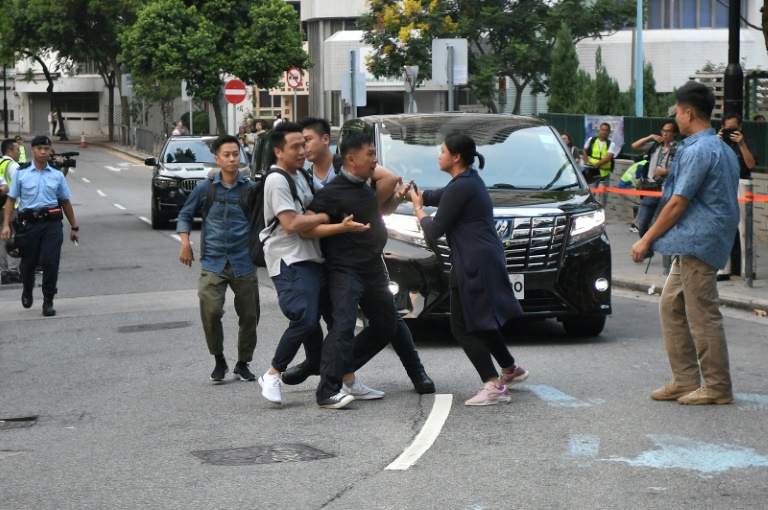 A protester runs out in front of Lam's motorcade as she arrives at the event.

On Wednesday, a top Chinese envoy in the city described those demands as "political blackmail", raising concerns that Lam has been given little wiggle room to de-escalate simmering public anger towards her administration and the police.

Authorities said they picked 150 people via lottery with those attending banned form carrying items such as umbrellas, helmets, gas masks and banners.

A small crowd of protesters gathered outside the venue on Thursday evening, with one man holding a placard reading "Talk to the arrested".

"This dialogue is too late," a 17-year-old student who gave her surname as Chu, told AFP.

"(I want) to let the government know that no matter how much longer this drags on with them not responding to us, we will insist on our five demands," she added.

Local media reported that police intended to maintain a low presence at the venue but were keeping 3,000 officers on standby in case of clashes.

Riot police, dressed in khaki overalls and carrying large plastic riot shields, were filmed carting supplies into the stadium ahead of the event, including boxes of tear gas and pepper spray containers. 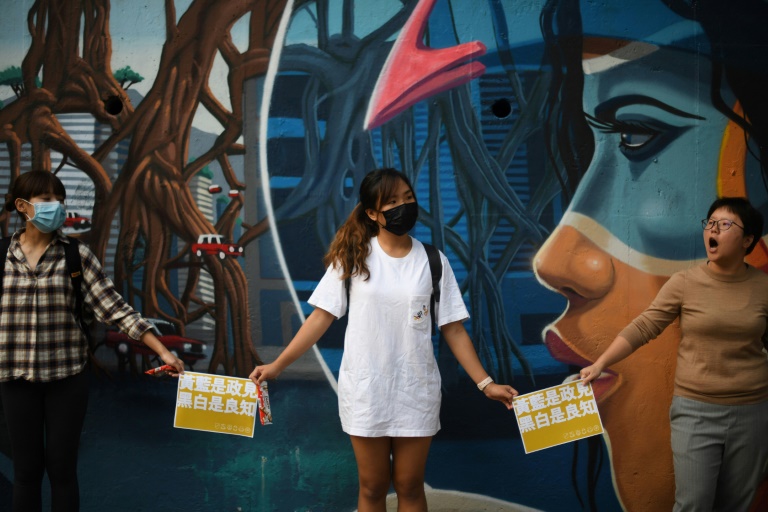 Protesters formed a human chain near the venue.

Lam, who was selected by a committee stacked with Beijing loyalists, currently boasts the lowest approval ratings of any post-handover leader.

Public appearances by her and other senior administration officials in the last few months have frequently resulted in protests.

Last weekend, a cabinet member was besieged in his official car until riot police rescued him.

Hong Kong has seen years of rallies and unrest sparked by Beijing's tightening grip on the semi-autonomous financial hub.

This summer's unrest was ignited by a now-scrapped proposal to allow extraditions to the authoritarian mainland with huge crowds hitting the streets.

But it has since snowballed into a wider movement pushing for democracy and police accountability after Beijing and Lam took a hard line. 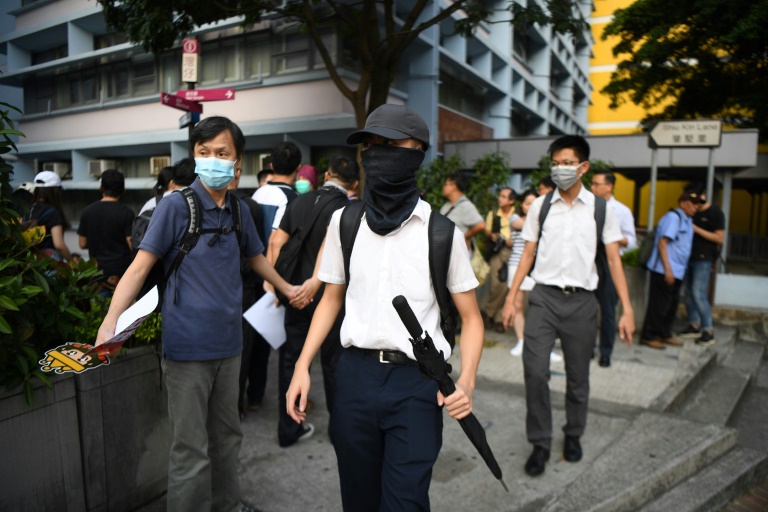 Protesters have demanded an independent inquiry into police conduct, an amnesty for more than 1,500 people arrested and fully free elections.

After the prosecution of previous democracy activists in recent years, this summer's movement has been deliberately leaderless and largely organised online.

But that has made it difficult for Lam's administration to know who to reach out to for talks.

On online forums used to organise protests, there were calls to surround the venue with a human chain.

Some comments welcomed the idea of the dialogue, but many more dismissed the meeting as a publicity stunt.

Hong Kong is bracing itself for a fresh round of protests in the coming days with Saturday marking five years since the pro-democracy Umbrella Movement kicked off and Tuesday being the 70th anniversary of communist China's founding.