There were protests in several Italian jails over new measures to combat the coronavirus that included a restriction on family visits.

INTERNATIONAL NEWS - Prisoners took to the roof of a Milan jail Monday, part of a string of violent protests in Italian jails against measures to keep the coronavirus out of the system, that left some inmates dead.

Jails have been ordered to stop all visits and limit day releases.

Rights campaigners warned of mass revolts over the new measures, and families gathered outside prisons to protest the restrictions - and to get news of their loved ones.

Around a dozen prisoners at the San Vittore prison in Milan managed to climb onto the roof of one of the wings and shouted slogans as the police and prison guards below looked on.

It was the second day of unrest following revolts in at least 10 jails across the country Sunday, from Bergamo, Venice and Modena in the north, to Bari and Naples in the south.

Prison guard union SPP said at least 23 prisons had been involved in protests between Sunday and Monday, amid frustration over measures aimed at preventing the virus entering the prison system.

At least three inmates died during or following the clashes at the Modena Sant'Anna jail, according to prisoner rights group Antigone. The Repubblica daily reported six deaths, citing police sources.

Italian news agency ANSA said there were eight deaths, with two having died in other jails after being transferred from Modena.

It said there were reports the prisoners had broken into a medical centre in the Modena jail and had overdosed.

Authorities in Modena would not immediately confirm the reports.

At San Vittore, the prisoners perched precariously on the roof tiles wore bandannas or scarves over their faces. Fellow inmates could be seen massed around the barred windows at the jail in the Italian capital.

Relatives rallied outside many of the concerned jails in protest over the measures, including a ban on family visits. 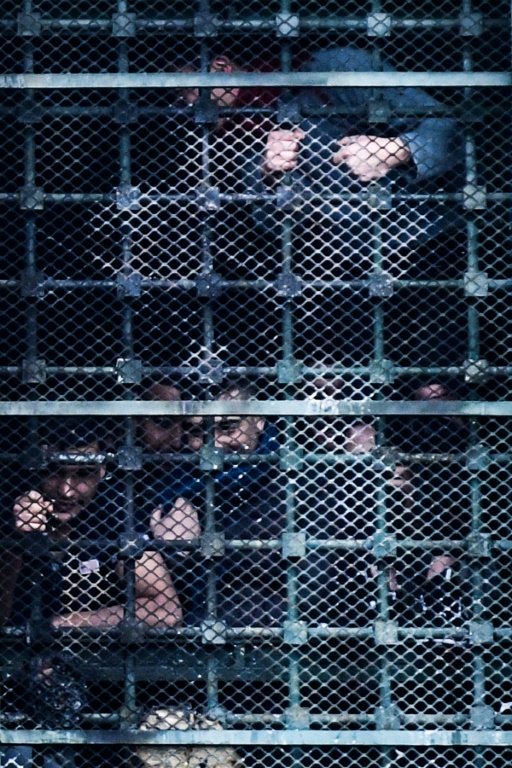 Prisoners rights group Antigone said some inmates had started protests once they saw media reports of similar actions in other prisons.

"We're urging inmates and relatives to stop violent protests, as they could spark others," Antigone's Andrea Oleandri said.

"The situation could rapidly deteriorate."

Prisoners, who get most of their information from televisions, tended to protest in solidarity if they saw convicts in other jails rioting, he added.

Family members desperate for news of their loved ones Monday had to be held off by prison guards at the entrance to the Modena jail, as ambulances and prison vans came and went, an AFP photographer said.

"This rumpus, this 'war' happened because the inmates hadn't been given any information about what was going on outside, and visitor visits had been suspended," said Gilberto, the father of one prisoner who did not want to give his last name.

"No-one's telling us who's died, who is injured, or why they died and why they were injured," the 59-year old told AFP.

Italy's prisons suffering from overcrowding, with over 61,000 inmates locked up in spaces designed to hold just 51,000.

The country has been hard hit by the virus - with some 366 victims so far - and the government has imposed draconian measures to stop it spreading further, including placing large swathes of the north under lockdown.

As well as halting visits and limiting day releases, all prison staff are supposed to have their temperatures checked on arrival each day. Medical checks for incoming inmates have also been ramped up, Antigone said. 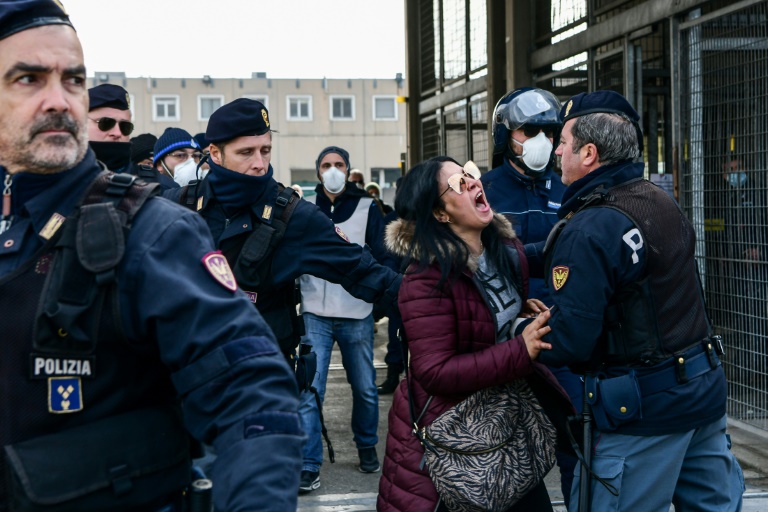 Police officers had to restrain the relatives of some inmates desperate for news of loved ones where violent protests had taken place.

"The prisoners are worried the virus will get into jail and spread," Oleandri said.

"They are in confined spaces. There are usually two or three people in a 12-metre square cell. And while visits have been suspended, there are still lots of people coming and going," he said.

Antigone has called for more inmates with only a short time left to serve to be allowed to do so at home, reducing the numbers behind bars.