INTERNATIONAL NEWS - The global tally of people infected by the coronavirus shot past 50 million on Monday, as United States President-elect Joe Biden geared up to name the scientists who will lead the country's response to its disastrous outbreak.

The incoming leader made the pledge in his first speech since being projected as the winner of the presidential election, signaling he plans to prioritize the pandemic from the outset.

Covid-19 has left more than 237,000 people dead in the US and is surging across the country, which last week voted out Donald Trump in a nailbiting poll.

"On Monday I will name a group of leading scientists and experts as transition advisers to help take the Biden-Harris plan and convert it into an actual blueprint that will start on January 20, 2021," Biden told supporters, referring to the day he will be sworn in as commander-in-chief and get the keys to the White House.

"The team being assembled will meet these challenges on Day One," his new transition website said.

According to a Johns Hopkins University tracker, the number of cases in the US is nearing 10 million and shows no sign of slowing, despite Trump's claim the world's biggest economy is "rounding the corner." 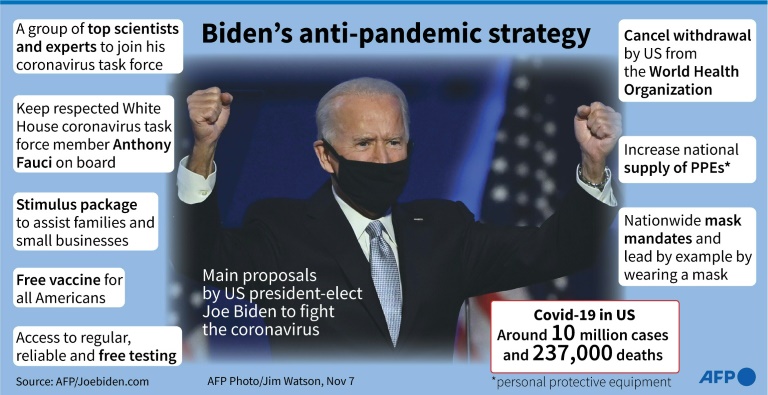 Myanmar street parties
The raging pandemic - which first emerged in central China almost a year ago - did not deter voters in Myanmar, where excited crowds bunched together in their eagerness to cast their ballots.

Hundreds of die-hard supporters ignored warnings and gathered in a premature celebration, dancing, singing and waving flags outside the Yangon headquarters of Suu Kyi's National League for Democracy (NLD). 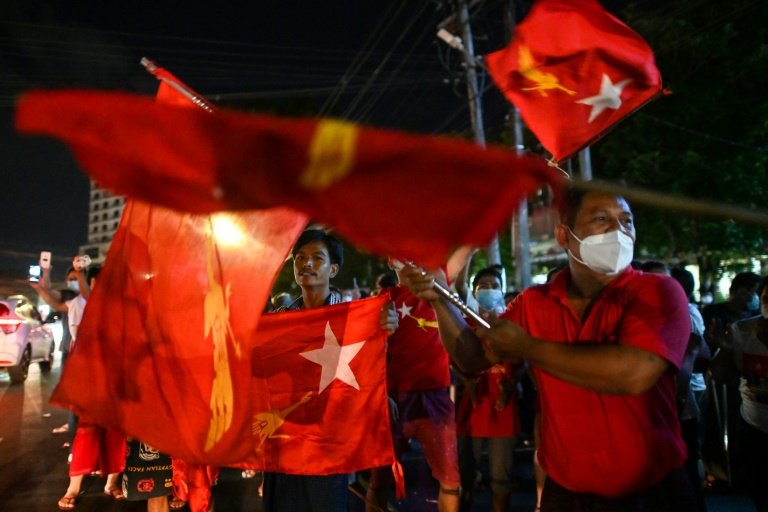 Hundreds of die-hard supporters ignored warnings and gathered in a premature celebration in Yangon.

Schoolteacher Hnin Wut Yee, 23, said she had "concerns" about the lack of social distancing, adding: "We're all watching each other with suspicion."

Cases of the coronavirus in Myanmar have spiralled upwards in recent months, sending swathes of the country into lockdown and forcing campaigns online, where hate speech between rival factions has festered.

But Suu Kyi refused to postpone the polls - a decision that could see "serious public health ramifications", the International Crisis Group watchdog said.

1.25 million dead
The virus has now claimed more than 1.25 million lives worldwide, according to an AFP tally, and over 50 million cases have been registered across the globe. 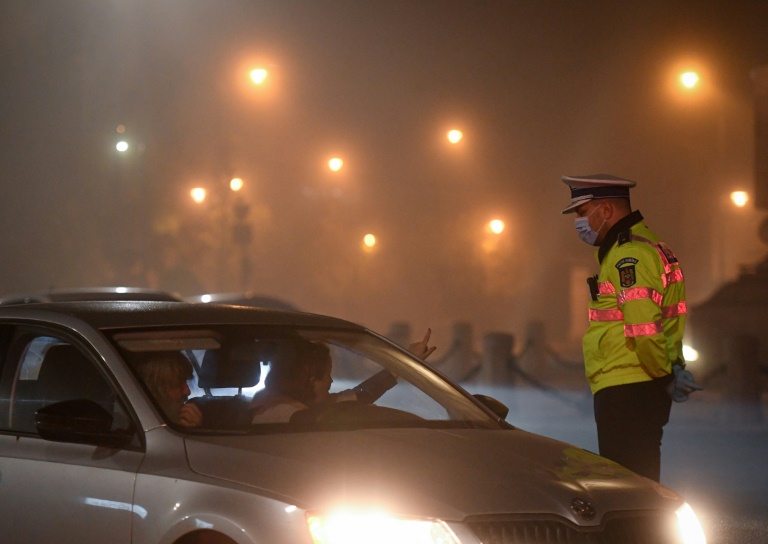 Under new measures in Greece, people can only leave home if they make a mobile phone request and receive authorisation.

Essential shops can stay open, including supermarkets and pharmacies.

Hairdressers have also been allowed to stay open, but just for two more days, and they were booked out.

The measures follow the imposition of tough restrictions in Italy, France, Ireland and the United Kingdom, while Germany and other nations have also imposed new rules.

Britain has banned entry to all non-resident foreigners coming from Denmark after a mutated version of the coronavirus linked to mink farms was found in humans.

Royals and politicians in London observed a low-key and socially-distanced Remembrance Sunday without the usual solemn pageantry to honour the country's war dead.

And demonstrators once again took to the streets across the world, including in Leipzig, Germany, where 65-year-old Anne told AFP: "For me there is no virus."

After Europe, the regions most affected are Latin America and the Caribbean with 11.6 million cases and 411,700 deaths, Asia with 11 million cases and 176,600 deaths and the United States and Canada with 10.1 million infections and 247,600 fatalities.