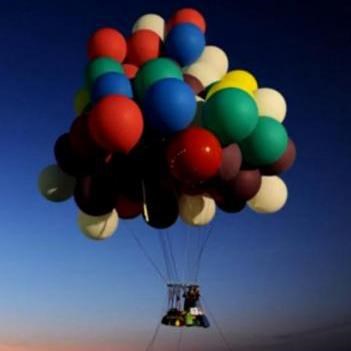 Instead of using a conventional hot-air balloon, Jonathan Trappe lifted off using more than 300 helium-filled balloons, like those used in adventure in the Disney-Pixar movie.

Trappe's goal is to float across the ocean.

"The Atlantic Ocean has been crossed many times, and in many ways, but never quite like this," the North Carolina native said on his website, which detailed his efforts.

Trappe and his balloons lifted off from a foggy softball field in northern Maine, near the Canadian border, at sunrise Thursday.

"Man, it was awesome," Bleess said. "It was amazing to watch."

Also on hand Thursday was Joe Kittinger, a retired Air Force officer who once set a record for jumping from a balloon 19.5 miles (31 kilometers) up and later became the first solo balloonist to cross the Atlantic in 1984.

As for Trappe, he's no stranger to the cluster balloons.

He's used them to fly in an office chair, and he's used them to lift a faux house, just like in the animated movie "Up." In 2010, he crossed the English Channel using a cluster of balloons. For his trans-Atlantic crossing, the basket in which he's riding is actually a lifeboat that could be used if he ditches in the Atlantic.

Trappe worked on the trans-Atlantic crossing for two years and hoped to be the first person to succeed in doing so with a cluster of balloons. By Thursday afternoon, he was well on his way, headed toward Newfoundland.

The airborne journey, if it goes according to plan, could take anywhere from three days to six days. Wind currents could bring him to northern Africa or Norway.