Hong Kong is using tech to track the coronavirus.

INTERNATIONAL NEWS - Electronic bracelets and phones that report your whereabouts, text messages if you stray too far from quarantine and digital detectives tracking where you've been - Asian countries have embraced innovative, if somewhat invasive, tech to counter the coronavirus pandemic.

When Hong Kong stylist Declan Chan flew home from Zurich earlier this week he was greeted by officials who placed an electronic device on his arm.

The wristband was connected to an app that he had to install on his phone as he headed into two weeks of compulsory self-quarantine at home.

It allows authorities to check his location as Hong Kong tries to halt fresh infections from people returning from overseas after two months of making impressive headway against its own outbreak.

Speaking to AFP by phone from home Chan, 36, said he was getting used to having a tracker that alerts authorities if he leaves his apartment.

"That's a bit mind boggling," he said. "But I would rather be in home quarantine than in a government centre."

Hong Kong's health authorities have held daily briefings on the outbreak. But the new bracelets were announced in a late night government press statement on Monday with little fanfare.

Some 5,000 wristbands were ready for use with another 55,000 on their way, authorities said.

On Thursday, Hong Kong began ordering all arrivals from overseas to wear the bracelets. 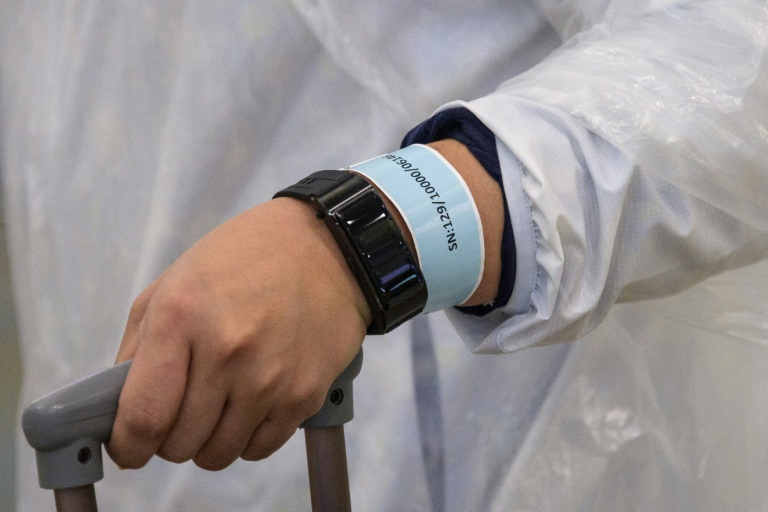 Electronic wristbands have been used to follow people placed under home quarantine.

The city is not alone in using such measures.

South Korea, China, Taiwan and Singapore - all of which have had success in curbing the spread of the coronavirus - have employed a range of tech solutions.

Smartphones with GPS are given to those isolating at home, with local officials tracking them via the Line messaging app.

Warning text messages are sent to those who break quarantine and the tracking system is connected with local police departments. Transgressors risk a fine of up to TW$1 million ($33,000) and having their names published.

South Korea has a similar app, although it is voluntary.

Singapore has a team of dedicated digital detectives monitoring those quarantining as well to trace where confirmed carriers have travelled to.

"Everywhere we go, we do leave a digital signature, be it from the cash we draw, or the use of the ATM card or the credit card," Leong Hoe Nam, an infectious disease doctor in Singapore, told PRI earlier this month as he explained how the team worked.

Both Singapore and Hong Kong release live details of which buildings have had confirmed COVID-19 cases.

The measures are effective at slowing infections but raise privacy concerns.

Transparent and democratic governments tended to have a better track record of checks and balances, she said.

"In places like China you see the most intrusive measures and the most arbitrary outcomes," she said.

But she drew a comparison with the aftermath of the September 11 attacks when sweeping and often draconian anti-terror measures were enacted by many nations.

"Emergencies often provide the best opportunities for the subversion of democratic principles," she added.

China has deployed the most sweeping and troubling tech to combat the virus.

Various cities and provinces last month began introducing a system of coloured QR codes that must be downloaded on mobile phones to aid in tracking people's movements.

Green indicates a clean bill of health, yellow means the bearer may have visited a high-risk virus area within the past 14 days and is subject to closer inspection, while red indicates quarantine is necessary.

There has been scant public explanation of how the information is obtained, other than vague references to big data, presumably by tracking a person's history of online payments, which have rapidly replaced cash in China.

Government announcements have made clear that the coding system will remain in use in some form even after the pandemic subsides.

Europe is also searching for tech options as it scrambles to halt spiralling infections.

On Wednesday a team of experts at the University of Oxford announced they were working with several European governments to explore an app for instant contact tracing that could be deployed with "appropriate ethical considerations".

"To effectively tackle this pandemic we need to harness 21st century technology."