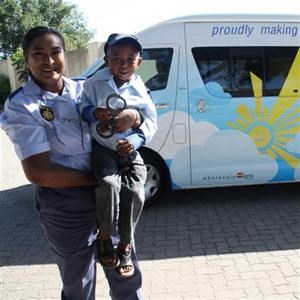 Many boys dream about being a good cop catching the crooks. Zukhanye (6) had the time of his life thanks to Reach for a Dream and Conville police chief Capt. Dolly Subramoney who organised it all.
GEORGE NEWS - Little six-year-old Zukhanye from George had told the Reach for a Dream Foundation that his greatest dream is "to be a policeman and to catch the crooks".

The Conville police station embraced the Foundation’s request to assist with Zukhanye’s dream and he was welcomed with open arms when he was delivered for his surprise.

From the moment Zukhanye stepped into the police station, he charmed all the members with his sunny personality and go-get attitude to life. Capt. Dolly Subramoney met the boy with the big dream on arrival and presented him with his own police uniform, after which she informed him that he was now ‘Captain’ Zukhanye.

She showed him how to salute, and there was not a member who was not saluted by the spirited little policeman. ‘Captain’ Zukhanye was assigned a radio and handcuffs, and presented with his own police scooter. He was shown the police cells, although he did not go in as we did not want to compromise his immune system.

At the gate to the cells he shouted out a friendly "Hello daar!" to the faceless people in custody. Then, a man (luckily a SAPS member in plain clothes, acting as a thief) was running away with some ‘stolen’ dreams and ‘Captain’ Zukhanye came to the rescue on his police scooter. He caught the culprit and cuffed him swiftly. Very assertively he marched his prisoner to the police van and after securing him in the back of the van, jumped behind the wheel.

Zukhanye retrieved all his ‘stolen’ dreams (presents), and the delight as he opened one after the other gift, was priceless. As a last treat, another of Zukhanye’s dreams came true when he got to ride home in a real police car.