Workers divided on 1 May 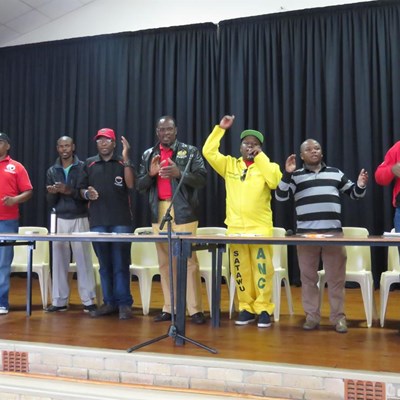 Leaders of Cosatu affiliates dancing to some of the tunes that were sung at the Workers Day celebrations. From left are: Simphiwe Mbalo (SADTU), Sandile Mbiyozo (SANCO), Sindile Adonis (NEHAWU), SPD Skhosana (SANCO), Sifiso Mtsweni (ANCYL), Mvana Brown ( COSATU) and Khaya Magaxa (SACP).
GEORGE NEWS - Divisions experienced by the Congress of South African Trade Unions (Cosatu) was the main topic at the Workers Day celebrations held in the Zone 9 community hall on the corner of Nelson Mandela Boulevard and Ngcakani Road in Thembalethu on Friday 1 May.
This follows Zwelinzima Vavi's expulsion from Cosatu and the National Union of Metal-workers of South Africa (Numsa), which both joined hands and formed a splinter group, called the United Front, with other nine disgruntled former Cosatu affiliates.
The United Front parked an entertainment truck at the corner of Nelson Mandela Boulevard and Ngcakani Road in Thembalethu where they expressed their disappointment about Cosatu and solicited support from those who passed by.
Mxolisi Bucwa, chairman of Numsa in the Southern Cape, said they no longer see Cosatu as championing the rights of the workers as it has diverged to capitalism.
"We are deeply concerned about the future of this country, where the gap between the poor and rich continues to grow.
"The rights of workers are still marginalised, while the ANC and Cosatu are not doing anything," said Bucwa.
Cosatu held a rather formal gathering at the Zone 9 community hall where speaker after speaker lashed out at the rival United Front.
"Vavi's tactics to destabilise Cosatu won't succeed, there can be many trade unions but Cosatu will remain the only legitimate union that will always be at the forefront of the workers' struggle," said a feisty ANC Youth League Regional Chairman Sifiso Mtsweni.
'We bring you the latest George, Garden Route news'