"It was the experience of a lifetime."

He shares his experiences with readers:

"The 14-day tour started in one of the cleanest cities in Africa: Windhoek, Namibia. We spent the first day leisurely exploring the city of Windhoek. The group was introduced to our tour guide in the evening and we spent a few hours bonding and getting to know each other at the iconic Joe’s beer house.

"The next morning, after a hearty breakfast, we took to the road in a luxurious air-conditioned overlanding bus to the Trail Blazers campsite in Ghanzi, Botswana."

Ghanzi welcomed us with the most spectacular sunset. While the food was prepared, the group learned a few veld tips during a Bushman walk. At the campfire we were also entertained by Bushman dancing.

"After a refreshing night’s sleep we left for Maun, close to the Okavango Delta. We set up camp at Island Safari Lodge with the delta on our doorstep. As an optional extra, we could fly over the delta to get another breathtaking perspective of this natural wonder. On the Zambezi, in Zimbabwe.

'The next day we went on a Mokoro trip on the Okavango Delta. It was an experience out of this world, sitting in a canoe with crocodiles and hippopotamuses mere meters away. Gliding along on the quiet water, the long sticks of the polers making soft sucking sounds as they punted us along, we had ample time to take photos.

"We made a stop at one of the islands where we all went for a nature walk, being treated to animal sightings aplenty. After lunch we returned to the starting point with the Mokoros."

"On day five we went to Elephant Sands. Having lunch next to the road our way there was a special treat.

"Here we were overwhelmed by the sight of wild elephants at a watering hole just a stone’s throw away. In awe of these majestic animals we sat, quietly captivated and taking photos while the camp was set up. It was a wonderful end to the day, putting us in a reflective mood that had us recapturing our experiences while we enjoyed a hearty meal. 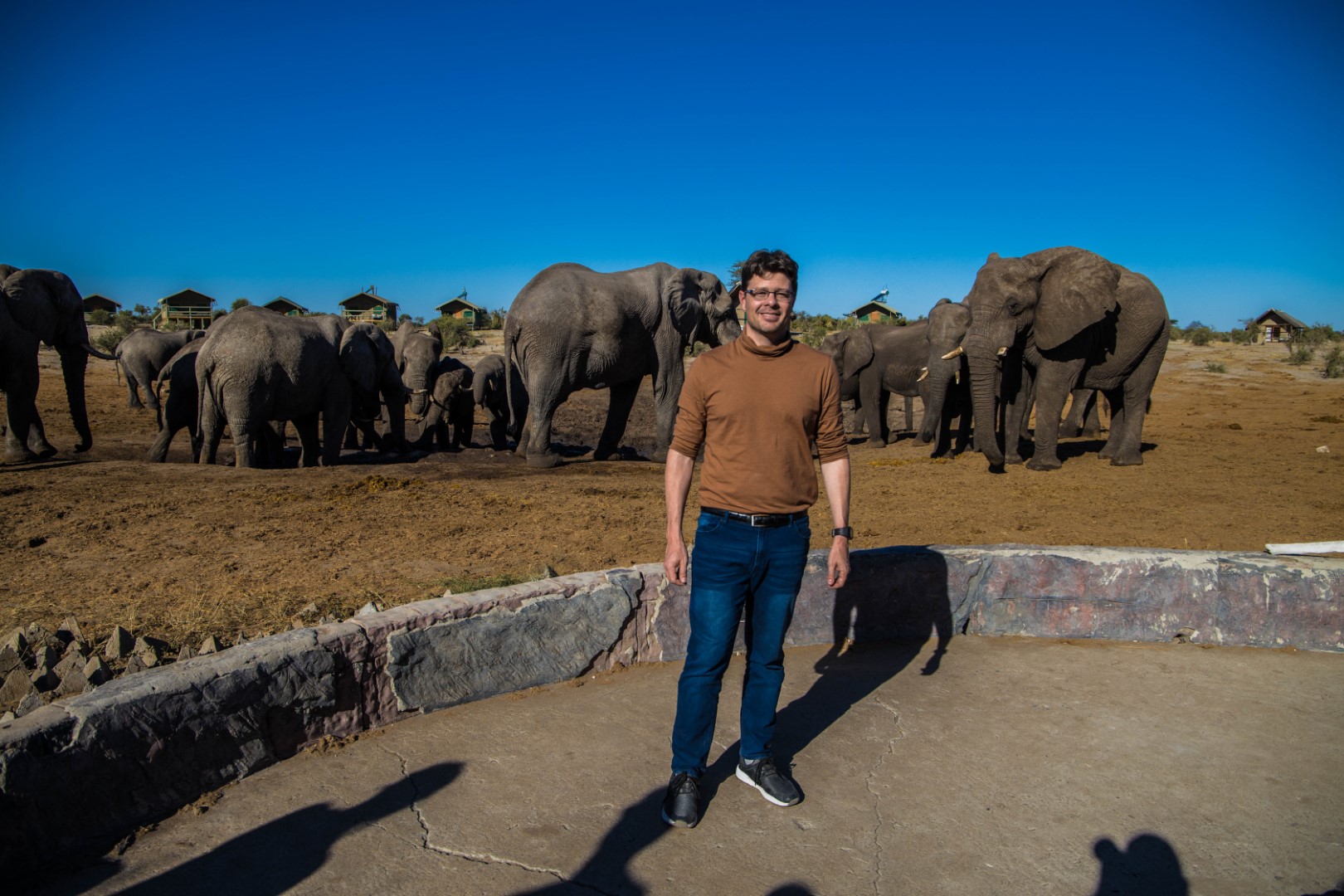 'The next morning we left for Thebe River Lodge outside the small town of Kasane, which is on the Chobe River and adjacent to the Chobe National Park. Here we had the magical experience of a sunset boat trip on the river, getting once-in-a-lifetime sights of crocodiles, elephant, hippopotamus, buffalo, antelope, birds and much more. The sunset over the Chobe was a breathtaking sight.

"The next day we crossed the border to Zimbabwe. Our destination: the majestic Victoria Falls. For two nights Shearwater Explorers Village was our home. First we definitely had to see the spectacular views of Victoria Falls, with its accompanying rainbow. There was a vast choice of extra activities we could take part in, including bungee jumping off the bridge connecting Zimbabwe with Zambia, gorge swinging, having a scenic flight over Victoria Falls in a helicopter, white water rafting and lots more. Another sunset cruise, this time on the Zambezi river, was a perfect end to the day.

"Our next stop was Hwango. After the camp was set up we had some unexpected guests – a troop of mischievous monkeys whose antics were very entertaining."

"A sunset game drive and some snacks while viewing animals at a watering hole was our last activity of the day. 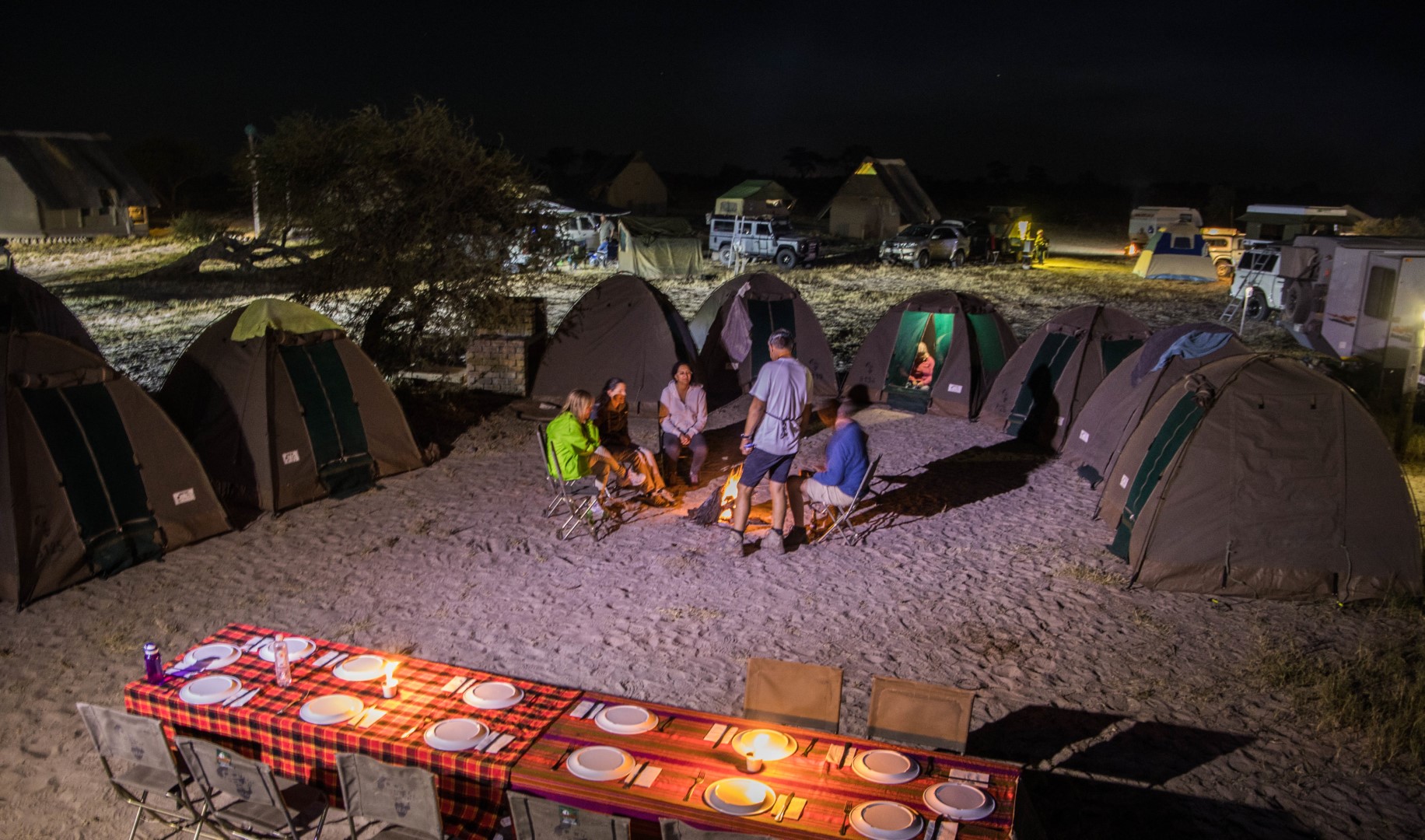 At the Elephant Sands campsite.

"Our next stop was Big Caves, 40 kilometres outside Bulawayo. Besides its awe-inspiring granite formations, it also boasts the highest leopard population in the world. The following day we went for a game drive with the iconic Ian Hammer, who took us on a rhino walk where we came to within a few meters from the beasts. Ian also taught us a few secrets of surviving in the bush. "Next on our itinerary was a cave with spectacular bushman paintings, combined with a history lesson. We then visited a Zulu warrior who told us the story of how he survived a leopard attack.'

"With the trip nearing its end, we crossed the border to South Africa, staying over at Bolayi just outside Musina. Here we saw the most beautiful Baobab trees, also called “upside-down trees”, and enjoyed some of the best scenic views of the tour.

"Having by this time become a “global family”, the members of the group cherished the last day spent together travelling to Johannesburg. We had to say goodbye, but we had memories we could treasure forever." Wessel van Heerden on the Okavanago, in Botswana.