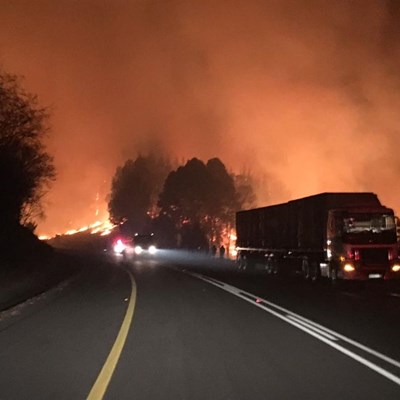 This photo was taken early this morning along the N2 between Plettenberg Bay and Knysna. This fire has caused the closure of the N2. Photo: Len du Plessis
SOUTHERN CAPE NEWS - “Trees are falling all over the show. Farmers, emergency services... everyone is getting involved in trying to bring this fire under control.”
This is what Noël Solomons, resident of Smutsville in Sedgefield told a journalist of the Knysna-Plett Herald this morning where he was trying to assist authorities in Elandskraal, near the Serenity Care Centre, to bring a raging fire under control.
This fire is only one of many reported this morning in the wake of gale force winds that hit the province from about 23:00 last night. This is according to James-Brent Styan, spokesperson for the Western Cape Local Government MEC Anton Bredell.
“The good news is that across the province to date, we have had no reports of fatalities or serious injuries, although some evacuations have been made and a handful of injured citizens taken to hospital by Emergency Services. The injuries were caused by roof collapses,” said Styan.
According to Styan, the Western Cape Disaster Management Centre (WCDMC) was activated at the Provincial Emergency Operations Centre at Tygerberg Hospital at 22:00 last night, in advance of the storm, to maximize the protection of the public’s health and welfare and protect critical infrastructure.
“Heavy wind and rain hit the west coast of the province and progressed eastwards during the course of last night – resulting in some damage across the province. This took the form of fallen trees, buildings losing their roofs, electricity outages and road-closures,” he said, adding that the closure of the N2 between Plettenberg Bay and Knysna was due to the outbreak of fires.
Styan emphasised that the storm has not yet reached its peak and travellers across the province today are advised to do so using extreme caution.
Eden District municipality reported the following fires:
- De Hoop/ Kouga fire (Uniondale area) – Eden staff deployed at this fire
- Hooggekraal fire (Karatara) – Sedgefield fire service on scene
- Kruisfontein fire (Knysna) – Knysna fire and rescue deployed at this fire
- Kruisrivier fire (Hessequa) – Hessequa fire and rescue teams on scene
- Herbertsdale fire (Mossel Bay) – Eden Riversdale team as well as Mossel Bay on scene
- Ebb and Flow - Wildernis (George) – George fire on scene
- Gwaiing R102 (George) – George fire on route to scene
- Eklandskraal (Close to Karatara)
According to Veldkornet, the following incidents were also reported.
George:
Mossel Bay:
Kannaland:
Hessequa:
Knysna:
Oudtshoorn:
If any readers have taken good quality photos of any of these incidents or other incidents affecting them, please e-mail photos to information@groupeditors.co.za.
ARTICLE: STEFAN GOOSEN, KNYSNA-PLETT HERALD JOURNALIST
'We bring you the latest Garden Route, Klein Karoo, Hessequa news'