Water: is there cause for concern? 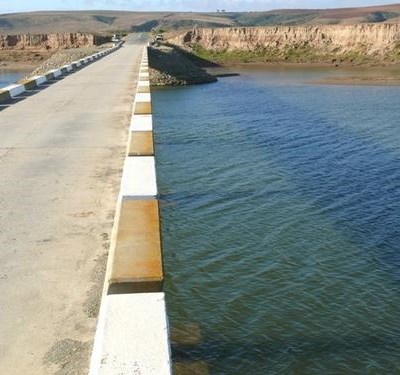 The Gouritz River.
AGRICULTURAL NEWS - A George Herald reader, who often drives through the Southern Cape and Klein Karoo, says he cannot help but notice "masses of water" in the rivers that crisscross the region and he questions the general assumption that the Southern Cape has water scarcity.
Reginald Walters, from Still Bay, says in a letter that several rivers from over an extensive area in the Klein Karoo converge and eventually drain into the Gouritz River. It forms one mighty exit through a very narrow gateway in the Outeniqua Mountains near the Jakkalsvlei wine cellar and is the ideal spot for a dam.
This, he proposes, could not only serve as a water reservoir, but could also generate hydro-electricity.
Water can be supplied to the whole Southern Cape, from Swellendam to Plettenberg Bay, and power generation will get a big boost.
(The rivers whose waters eventually land in the Gouritz River include the Bok, Anys, Buffels, Dwyka and Gamka rivers in the west, and the Olifants, Kammanassie, Groot and Gouritz rivers in the east.)
Building a dam wall in the Gouritz River is not that simple, says Harold Basson, director of Civil Engineering Services in George.
"The water demand of the Gouritz River catchment area already exceeds the supply of the system and the Department of Water and Sanitation would probably not approve a dam. However, other hydro-electricity generation options in the Southern Cape are a possibility and should be investigated."
Basson referred to a report on water resour-ces in the Klein Karoo that appeared in the SA Journal of Science. The document states that the Klein Karoo, which is situated in the primary catchment of the Gouritz River, receives a low rainfall of between 100mm and 450mm per year.
The very variable flows of the major tributaries of the Gouritz (Touws, Gamka and Olifants rivers) results in a yield of 161 mega cubic metres per year, which is exceeded by the current demand for water in these catchments, namely 182 mega cubic metres per year.
Demand is projected to increase by between 23% and 150% by 2025.
According to the authors of the report, changes in the approach to water management are required, "including improving the efficiency of irrigation and land restoration to improve water infiltration and reduce soil erosion".
Their conclusion was: "We believe that it is time to change to a water management approach that is designed to anticipate and manage the inherent variability in water resources in the Klein Karoo, thereby placing the region on a path to sustainable development."
The report, compiled by David Le Maitrea, Christine Colvina and Ashton Maherrya, is titled: 'Water resources in the Klein Karoo: the challenge of sustainable development in a water-scarce area' and it appeared in the South African Journal of Science 105, January/February 2009.
Comment from the Breede-Gouritz Catchment Management Agency is being awaited.
ARTICLE: ALIDA DE BEER, GEORGE HERALD - JOURNALIST.
'We bring you the latest Garden Route, Klein-Karoo, Hessequa news'

Read more about: water garden route enough cause for concern masses of water