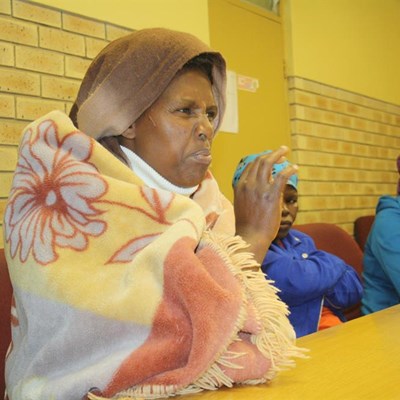 Xolisa Bala says she can not explain how the towel she wrapped around her waist burst into flames as she was nowhere near anything that can cause a fire. Photos: Lizette da Silva
GEORGE NEWS - The Bala family, from Thembalethu, believe a curse, called Vutha, caused the fire in which two young toddlers burnt to death two weeks ago. The family lives in an informal settlement in Zone 9.

According to Xolisa Bala (40), she realised something was wrong on Saturday afternoon (19 July) when a towel she had wrapped around her waist inexplicably burst into purple flames.

"I threw it on the ground and the flames disappeared. I later put the towel in a bucket of water," said Bala.

She says earlier that night she bathed her two young daughters, Litalethu (4) and Anthle (6), and put on their pyjamas. Her eldest daughter also returned home from church later in the evening and the family went to bed at 23:30.

"Around 02:00 I heard voices screaming 'it's burning' and when I woke up Litalethu and Anthle were lying on the bed and were burning from their heads. I was lying on the mattress on the floor next to the bed with my head at their feet. It was very dark inside as we had no candles or lamps burning. I jumped up, grabbed a bucket of water and threw it on the girls in an effort to put out the fire, but it was as if the water made the fire worse - almost like when paraffin is thrown on a fire."

Her eldest daughter then grabbed her baby and they all ran outside to seek help from the neighbours. At this stage, Bala says, the two toddlers were alone in the burning shack.

"It was very dark and we had difficulty seeing. As we left the house the door closed behind us and we struggled to open it to get back to the girls. The shack later collapsed, with the girls inside. Everything was destroyed except the white door. It didn't have a mark on it," says Bala.

The George Herald asked her who she thinks would cast such a spell on her or her kids, but she had no idea.
It was explained that the spell is rare, "but it does happen".

The police, however, say their preliminary investigation with a trained arson detection police dog from Cape Town shows that a
candle most probably started the fire.

Major-General Thembikile Patekile and the management of the Thembalethu Police also met with the family last Friday morning and handed over food and clothes that they had collected to the Balas.

The toddlers would be laid to rest this weekend in Bala's home town, Lady Frere, in the Eastern Cape. Xolisa Bala says she can not explain how the towel she wrapped around her waist burst into flames as she was nowhere near anything that can cause a fire. Photo: Lizette da Silva