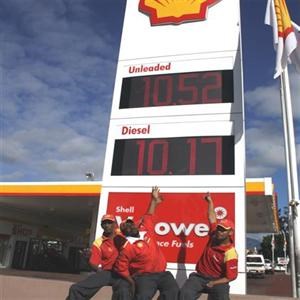 Pump attendants of Shell Southern Cape Motors Jan Rouman, Sindile Gotyi and Willem America are in the first line of receiving disgruntled motorists’ grievances, and although they can do nothing about the price hike, their friendly attitude provides a little consolation to customers.
GEORGE NEWS - An even higher price will be paid for transport and personal mobility from this week when the petrol price will rise by 23 cents per litre.

On average the monthly spend on petrol was estimated by users to increase by about R200 where workers travel between main centres along the Garden Route like George to Mossel Bay or Oudtshoorn.

It will be the highest the petrol price has been in the history of South Africa.

Importantly it should be noted that it is not only the "lucky" people with cars who will be affected by these increases - the increase on paraffin is even steeper at 41 cents per litre.

Paraffin is extensively used in rural or underdeveloped areas for heating, cooking or lighting.

All grades of petrol will rise by 23 cents and diesel by an average 36 cents per litre. At the coast the petrol price will be somewhat lower at R10.52 per litre and a diesel price that may vary.

Motorists the George Herald quizzed on their feelings were unhappy but resigned about the increase.

"I have reduced travel between Oudtshoorn where I live and George where I work to a minimum.

"The petrol increase is not immediately noticeable, but it does hurt. Where one could get by with R300 of petrol per week, for example, the same amount of travel will now cost R350. A month’s travel expenses goes up from R1 200 to R1 400 and over a year this adds up," said Frank Abrahams of Group Editors.

Owner of The Waves at Wilderness Gawie van Heerden said that motorists will need to make more use of car pools, particularly for school runs and regular travel.

"Motorists will also need to take more care with car maintenance to reduce their costs as a well-maintained car is more efficient," he said.

The steep increase is the fourth in four months. The inland price of petrol will be R10.77 per litre.

"With the problems in the Middle East continuing it doesn’t seem like we’re in for relief any time soon," a reader who wishes to remain anonymous, said.

He also quoted media reports saying the rate of inflation on petrol was an unacceptable 30% to 34% for the eleven months of the year to date.

"The increase will certainly have a negative impact on the cost of transport across the board," said Ingrid Cronjé, spokesperson of the George Chamber of Commerce.

"Apart from the domino effect of a petrol price increase by itself, there are some concerns that some suppliers use any such increase to boost their prices and increase profit. It is not realised how badly this can impact on the prices of food and other necessities to older people in our community," she said.

The price increase was announced last Friday by the South African Department of Energy.

The maximum retail price for LPGAS will also increase significantly by 34 cents per kilogramme.


Vehicles queue at Multi Motors Engen in Courtenay Street on Tuesday after the close of the day.