Save the rhino one digit at a time 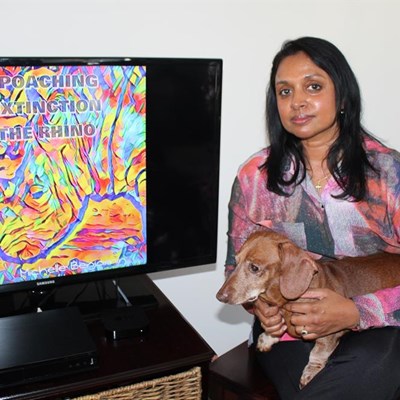 Michelle Benjamin is giving away her art on World Rhino Day, 22 September. For a link to this digital image send an email to bluerhinokrugerpark@gmail.com. The image can be printed on, for instance, canvas or poster. Photo: Michelle Pienaar
GEORGE NEWS & VIDEO - On World Rhino Day, Thursday 22 September, an acclaimed artist with a big heart for these endangered animals will give away some of her digital creations.
The digital artist Michelle Benjamin designed a few posters especially for World Rhino Day, to help raise awareness for the plight of the rhino's survival. All rhino enthusiasts are invited to send an email to bluerhinokrugerpark@gmail.com.
In return they will receive a link to Benjamin's artwork to download and print for their own pleasure, on for instance canvas or on paper. The cut-off date for this gift from her studio is Thursday, 22 September.
Benjamin has been using her artistic talents to help raise a substantial amount of funds for national and international charities, supporting the anti-poaching cause. Originally from Durban, Benjamin and her husband moved to George after living for a few years in Pretoria. She exhibits regularly in Soho, New York on invitation.
Probably her most well known piece, Blue Rhino was auctioned in London by Save the Rhino International on 6 November 2013. The artwork fetched £1 000 and all proceeds were donated to the foundation in the fight against poaching and possible extinction of this very endangered species of wildlife. Blue Rhino was showcased all over the world, including at the Sustainable Living Exhibition in Durban.
Asked about her choice of medium - creating art digitally - she said, "An artist can use anything. It is how you interpret your world and what you do with what you have, which makes you an artist."
Benjamin uses art to convey a message of hope, unification and preservation of our natural heritage. "The large purpose of my life is using art and humanitarianism to unite people together from every part of the world, to live life the way we are supposed to. For me this means to respect, honour, appreciate and love each other and our planet the way God intended for us to do."
Her latest project is a children's book, with a strong sense of awareness for the rhino cause. A good number of her own artpieces will feature in the publication. Still deciding on the publishers, the book will be launched next year in New York and the aim is to raise US$1-million for the United States Fish and Wildlife Service.
Watch a video below:
ARTICLE & VIDEO: MICHELLE PIENAAR, GEORGE HERALD JOURNALIST
'We bring you the latest George, Garden Route news'