Raising of dam wall to start in October 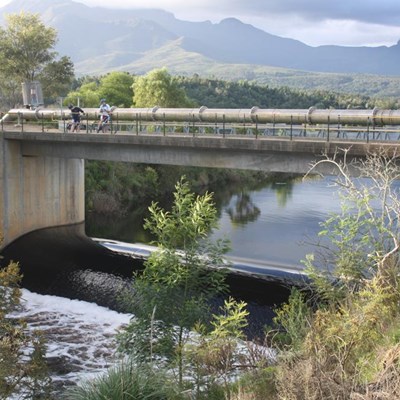 The dam wall overflowing after good rains in November 2015. The dam level is currently at just over 70%. Photo: Alida de Beer
GEORGE NEWS - The raising of the Garden Route Dam spillway will start in October 2017 with completion scheduled for May next year.
Aurecon has been appointed as consulting engineers on the project, according to municipal communication manager Chantel Edwards-Klose.
Last year, George Herald journalist Pauline Lourens reported on water consumption and supply figures provided by the municipality. These showed that the current yield of the Garden Route Dam (with the Kaaimans pump station in operation) is 41,37 million litres per day. When the yield of the reuse treated effluent plant (phase 1) is added, the total capacity is 49,18 million litres per day.
Malgas Pump Scheme adds another 6,57 million litres, bringing the total capacity to 55,75 million litres per day. This project was completed in 2010 and forms part of the existing supply scheme. The raising of the Garden Route Dam wall will bring the total capacity to 59,04 million litres per day. This is about double the city's average daily consumption of 28,5 million litres.
Responding to a query from the George Herald, Edwards-Klose said that the reuse plant is not in full use. "Due to pumping cost savings, water is currently only circulated through the reuse treated effluent plant to keep it operational, until the dam level requires additional feed."
In response to concerns recently aired by a member of the George Deep Sea Angling Club about the receding level of the Kaaimans River mouth, Edwards-Klose said, "There is no constant water release (from the dam) in place, due to the relatively low impact on the estuary."
She said however, that the recently approved Water Use Licence Applications (Wula) under the Water Act will require a future outlet of 7 litres per second, which will be implemented once the dam wall is raised.
The tender for the works will be advertised in May or June for the contractor to move onto site in September 2017.
With water scarcity facing many parts of the country, some George residents often air their concern to the newspaper about the provision of adequate infrastructure to ensure delivery of services - and especially an essential commodity like water - to a fast growing population.
ARTICLE: ALIDA DE BEER, GEORGE HERALD JOURNALIST
'We bring you the latest George, Garden Route news'