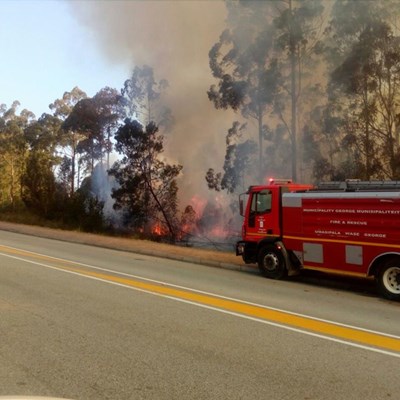 Firefighters battle a runaway veld fire at the Malgas River on Sunday.The welcome rain finally helped to quell the fires at Malgas as well as Touwsranten.
GEORGE NEWS - The brief downpour on Monday evening and in the early hours of Tuesday brought welcome relief to the George Fire Brigade who had been keeping up a relentless battle against the runaway veld fires in the Touwsranten, Hoekwil and Malgas River areas since Sunday.
The fires were declared under control on Tuesday morning after the George fire brigade monitored the fires throughout the night, said assistant George municipality spokesperson Debra Sauer.
George fire brigade was left to its own devices as other fire fighting services, including Eden fire brigade, were kept very busy fighting the blaze in the Swartberg mountains near Prince Albert.
In the meantime, Wilderness Residents and Ratepayers Association secretary, Vanessa Hau-Yoon, reminded residents not to partake in any ceremonies involving fireworks or Chinese lanterns. "Unusually strong southerly winds are forecast particularly for Christmas Eve and over the rest of the holiday period. This could easily result in more tragedy for the region. Everyone is requested to make sure that you have the 24/7 emergency number saved on your mobile phone."
The emergency contact numbers for George municipality is 044 801 6300 and for Eden district municipality it is 044 805 5071.
ARTICLE: PAULINE LOURENS, GEORGE HERALD JOURNALIST
'We bring you the latest George, Garden Route news'