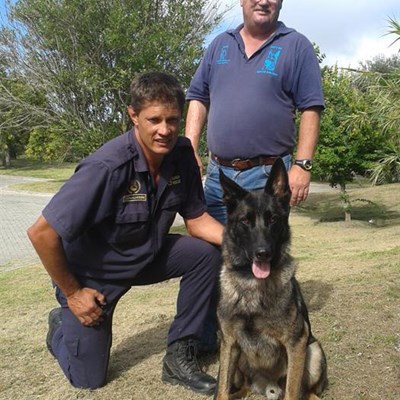 Job well done. Kneeling beside Vino is his handler Warrant Officer Rocco Malherbe and Warrant Officer Wessie Westraad.
GEORGE NEWS - A British tourist who went missing at Carmel Guest Farm near Victoria Bay last Wednesday night was rescued by Vino, a police dog from the Outeniqua K-9 Unit, after he found her in a ditch in a bushy area on the grounds.

Margaret Bet (76) went for a walk when she fell into the ditch and was unable to get back up. She was found Thursday afternoon, severely dehydrated and traumatised after spending almost 24 hours in the ditch exposed to the rain during the previous night.

Bet was transported to the Mediclinic George and reports have it that she is reco-vering well after her release a day later.

According to Captain Malcolm Pojie, the Southern Cape Police spokesperson, Bet was last seen on Wednesday 5 February at approximately 19:30.

"The next morning she did not pitch for breakfast and personnel went to her room. They saw that she didn't sleep in her bed and only then discovered that she had gone missing and immediately alerted the local police who responded rapidly."

The George Police launched a full-scale search, assisted by the Outeniqua K-9 Unit, into the surrounding bushes and terrain at Carmel.
"Their efforts paid off when the rescue dog reacted positively and dragged his handler to a bushy over hang where the traumatised 76-year-old was found," said Pojie.