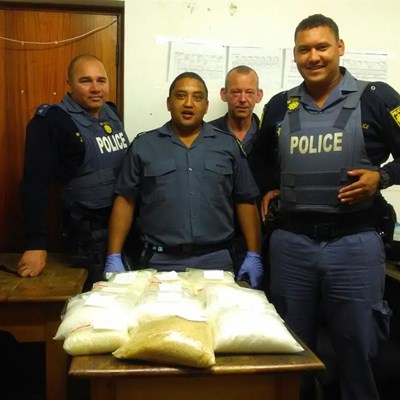 Members of the George police and Outeniqua K9 dog unit with the tik valued at over R5.8 million.
GEORGE NEWS - Police last week arrested a man near Wilderness in possession of tik with an estimated street value of more than R5,8 million. The suspect (34) was arrested at a road block on the N2 highway while travelling to George from Port Elizabeth.
According to Captain Malcolm Pojie, the Southern Cape police spokesperson, members attached to George Visible Policing and K9 Outeniqua (George) conducted routine roadblocks on the N2 on 28 October at 00:30 when they pulled over a truck on the Touw River bridge.
During a search of the vehicle, the narcotics detection dog, Tessa discovered the stash in bags inside a toolbox.
"The 14,665 kg of tik as well as the truck was confiscated. The suspect was charged with the illegal possession and/or dealing in tik. The suspect appeared in the George magistrate court earlier this week.
Provincial management and the Eden cluster commander, major General Oswald Reddy has commended the members involved for their vigilance and dedication to eradicate drug trafficking and the abuse thereof. He also warned drug peddlers to stop their illegal activities as similar initiatives by the police will increase over the festive period.
On 26 October at 06:10 members of the Central Karoo K9 unit was busy with routine inspection when they pulled over a suspicious truck in Donkin Street that was en route to Cape Town. They discovered 8.6 kg of dagga that was concealed in tape inside the luggage of one of the three occupants.
Police arrested a 24 year old man from Lesotho. The estimated value of the dagga is R17 200.
Read a previous news flash: Police confiscate drugs worth R5.8 million
ARTICLE: LIZETTE DA SILVA, GEORGE HERALD NEWS EDITOR
'We bring you the latest George, Garden Route news'