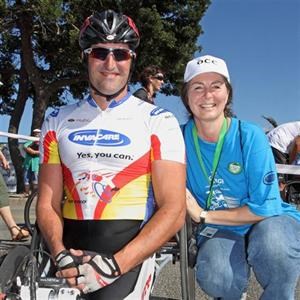 Presented by ACSA (George Airport), the 10th anniversary race met the organisers' goal to attract over 1 000 entrants - the highest number of competitors ever - including top athletes from around the world and all over South Africa.

Van Dyk (Maties Helderberg Club), who hails from Paarl, averaged 38km/h in the race. He has been racing for 10 years and it is the tenth time that he has entered the OCC race.

Speaking after the race, Van Dyk praised organisers and spoke of the fierce competition. "All the hard training is worth it to be able to stand on the winner's podium today. Other competitors were constantly right behind me. The race was not easy to win - I couldn't relax for a single minute.

"We worked hard together but it was still not easy. As always, the race was very well organised and the course was extremely safe, thanks to the traffic officials from George Municipality, with no danger from traffic."
Zimbabwean

Alfred Muroyiwa from Zimbabwe took first place in the men's open T53/54 Racing Wheelchair Division with a time of 2:23:09.

In an excellent time of 2:02:27, Hilary Lewis from South Africa was first in the Open Paraplegic Ladies Division.
Junior Tiaan Boshoff from Hermanus with his handcycle won the 10km distance in a time of 0:22:32.
Prize money of R244 000 was split over 44 categories in three distances - a 42.2km full marathon (with a R10 000 first prize), a 21.1km half-marathon for athletes using racing wheelchairs or hand cycles, and a 10km distance, which also allowed basketball chairs and ordinary wheelchairs.

Alfred delights spectators
The 5km fun event, in which young and old were pushed in their wheelchairs by a helper, attracted entrants of all ages from all corners of the country.

Celebrity actor and comedian Alfred Ntombela delighted spectators with antics as he pushed Veronique Pietersen in the fun event, while celebrity Katlego Maboe joined in the fun by pushing Sheronique Draai. Sheronique and Veronique are children of Optima Special Day Care Centre in George.

More than 900 helpers
Helping with the smooth running of the 10th OCC anniversary event were more than 900 people, who were involved as organisers, volunteers, officials and chair pushers.

Event director Esther Watson was delighted with the day. "As the last athlete crossed the finish line, I breathed a sigh of relief that we had once again kept our record of zero casualties 100% intact. It is an honour and a privilege to feel we have made a difference in the lives of the competitors by providing an opportunity for them to compete as well as have fun. I am forever in awe of the achievements of every one of these special athletes. Thank you to all who helped to ensure that the event was a roaring success.'

The OCC race is South Africa's only international wheelchair road racing sporting event for persons with disabilities, and is recognised as an official championship event by the SA Sports Association for the Physically Disabled (SASAPD).
For race results, more photographs and further information, visit www.georgeocc.co.za or phone event director Esther Watson on 082 421 9359.