The architect’s drawing shows that the existing pier will make way for a small harbour and a helipad will be built at the Back of The Black Pearl. The red lines indicate where harbour blocks will be laid to protect the waterfront properties.

Anyone who believed the story posted this morning about Victoria Bay being the site of a proposed small harbour development and helipad on the hill behind The Black Pearl, you have been caught out, April Fools!

Thank you to all the role players who collaborated in bringing the fake news to the George Herald website to stir up a bit of fun.

GEORGE NEWS - A small craft harbour and a helipad are among development proposals for Victoria Bay that will see the historical jetty make way for an exciting new marina-type precinct.

Dr Ol Drinkwater, a Dutch financier behind similar schemes on Chinese peninsulas and in Dubai, is planning the development in partnership with Dennis Venter, owner of The Black Pearl, a private home which is located in front the jetty entrance.

Drinkwater envisages that the development will completely change the character of Victoria Bay.

“It will be transformed from a sleepy-hollow surfing hamlet into a vibrant quasi-commercial hub,” he told the George Herald via e-mail.

“Easy access for marine motor craft to the sea will add extreme water sports to other activities on offer in the bay, and the potential to link light sailing vessels with deep-sea craft and the helipad make the possibility of building a shadow economy, free from the strictures of customs and excise control, a huge opportunity for the local community.”

Venter, a commercial pilot and owner of the company, Black Pearl Marine (Pty) Ltd, says the helipad will enable him to fly tourists directly to Vic Bay. The helipad will be located at the back of The Black Pearl. Venter, who bought this property three years ago, caused a stir when he renovated the house and replaced the front boundary wall with a spiked metal fence. Regular day visitors and surfers who used the wall as seating were especially up in arms.

Rod Hossack, long-time resident and avid surfer, welcomes the development and foreign investment. “We are especially happy that harbour blocks will be laid to protect our properties from high seas during storms. Some serious damage was caused by the storm waves in August last year. A surfer’s corridor and new point break will be created for surfers.”

Ian Wesson, owner of the bed and breakfast establishment Pier Plesier, says the development will bring a welcome boost to the bay. “If you consider cities like Monte Carlo that has race tracks through the city, I think helipad facilities and a harbour will be a fantastic asset. It will certainly add to the value of the bay and its properties. This is something interesting and positive that we should be thankful for in this day and age. If you consider how technology abounds, then we need to keep in step and not remain behind in the future.”

Venter said planning is at an advanced stage and they are hoping dredging for the harbour could commence later this year, pending approval from the authorities. “Completion of the scheme is scheduled for 2025. Our application is currently being considered by George Municipality and Environmental Affairs.”

Because of the Easter weekend neither of these authorities could be reached for comment.

A local surfer, who wanted to remain anonymous, was livid when he was approached for comment. “This is the craziest idea I’ve ever heard of. Where was this advertised? The surfer fraternity certainly was not consulted. Vic Bay is known the world over as one of the surfing spots. It is a public space, now a bunch of elite lunatics are hijacking it for themselves. There is no way that this is going to happen. Over my dead body.”

In the meantime, the developers are inviting enterprises to contact them for berthing and trade enquiries. Contact person: Arnold Olivier on +27 (82) 564 5681. 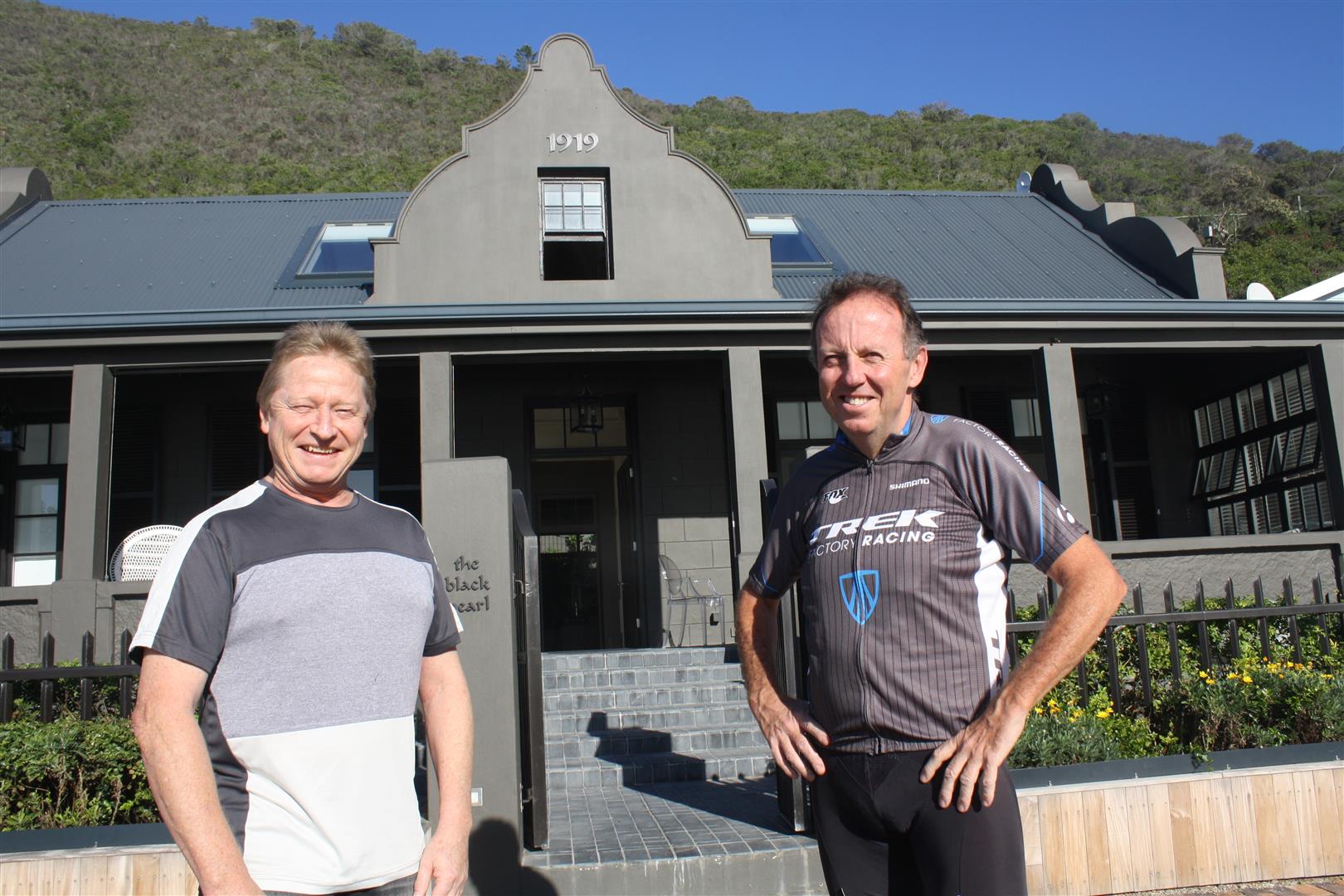 The hill behind The Black Pearl will be home to the helipad. Dennis Venter, owner of The Black Pearl, is a commercial pilot and wants to be able to fly tourists directly into Victoria Bay. He is partnering with a Dutch developer in the proposed development. Ian Wesson (left), owner of Pier Plesier B & B, welcomes the development and opportunities it will bring to Vic Bay. Photos: Alida de Beer 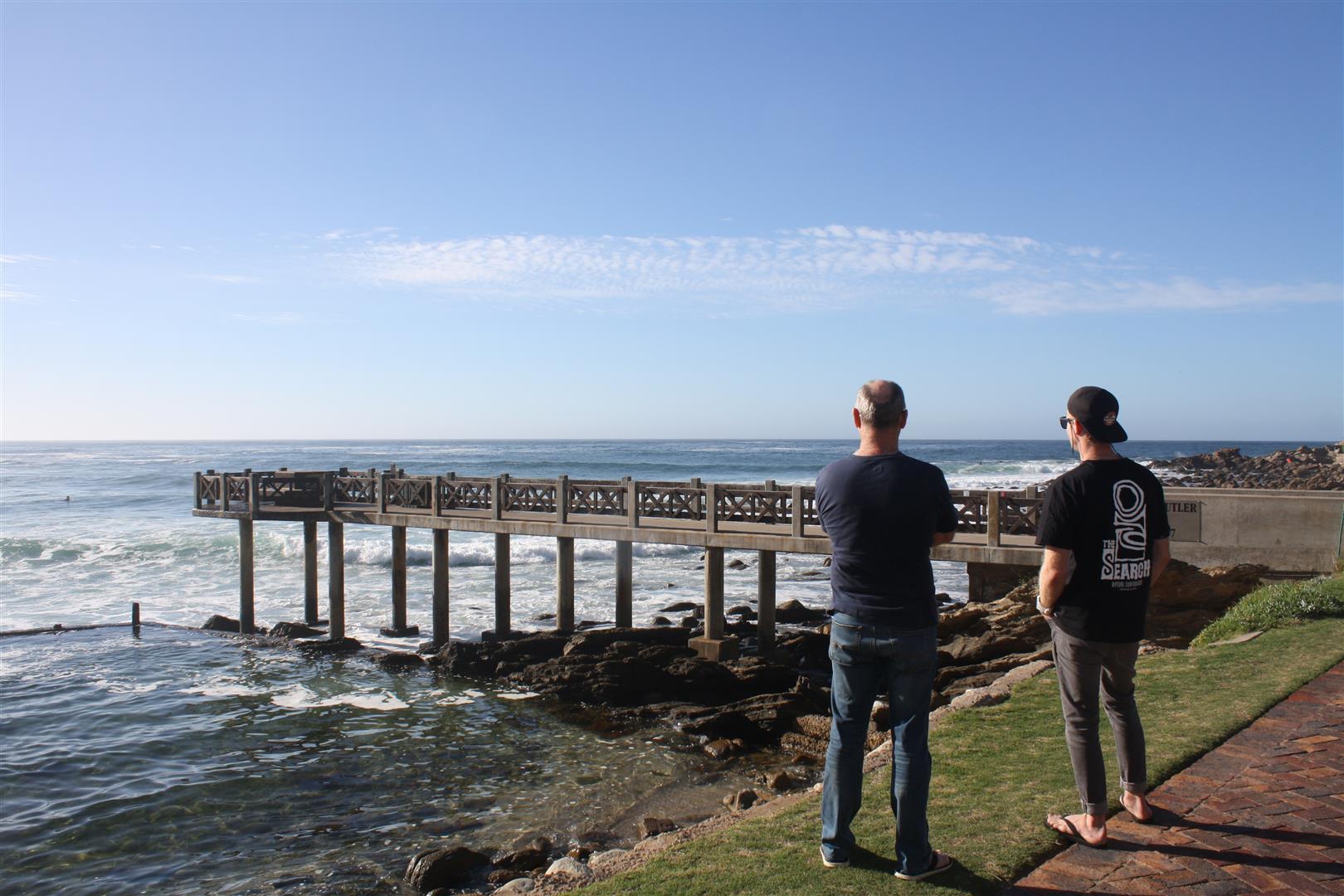 The old pier will make way for the harbour. Photos: Alida de Beer