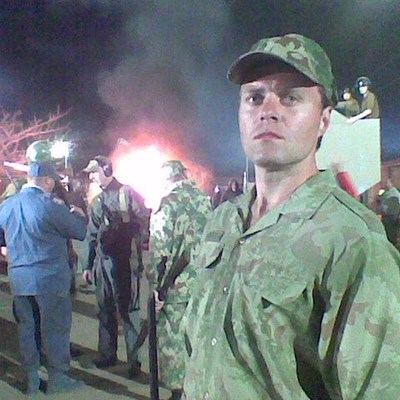 Rudolf de Wet made his acting debut as an extra in Mandel: Long Walk to Freedom which was largely shot in Cape Town. His twin brother De Wet, who is more used to being filmed in Tarzan loin cloths, thoroughly enjoyed the action scenes.
GEORGE NEWS - The Du Toit "Tarzan" twins of George feature as extras in the blockbuster Mandela: Long Walk To Freedom currently on circuit. Rudolf and De Wet du Toit landed small parts in the big budget film produced by Anant Singh in which British actor Idris Elba, stars as Mandela.

Rudolf enthused, "It was an awesome and unforgettable experience. We were given roles as policemen as well as soldiers. Explosives and rocks were thrown at us and we had to run alongside armoured vehicles while shots were being fired all over the place.

It was like having military training for real. In one instance De Wet had to drive a police van speeding into a residence, which then exploded engulfing the area with flames."

De Wet, who made and starred in several YouTube Tarzan films, said it was a surreal experience. "In one of the dramatic Sharpville scenes we were police officers chasing school children, who then retaliated by throwing stones at us. The British film director Justin Chadwick and his crew put a lot of effort into making this film authentic and set up huge life-like sets at Cape Town Film Studios. We actually felt like we really moved back in time."