Before her career at the George Business Chamber she was involved with banking at senior management level.

Ingrid Cronje is getting ready to travel, but will be back.

GEORGE NEWS & VIDEO - It has been 10 years of hard work, but she will miss her interaction with local business people with whom she has built long-standing and enduring relationships. So says outgoing Chief Executive Officer (CEO) of the George Business Chamber, Ingrid Cronje.

Ingrid is retiring this month and will attend her last annual general meeting as CEO next Tuesday 20 April.

She has walked a long road with local business after joining the chamber as manager on 1 March 2011, and became CEO in 2015, when the chamber became a non-profit organisation.

Before her career at the George Business Chamber she was involved with banking at senior management level.

Ingrid says the chamber is very different compared to 10 years ago. In 2011 there was a lot of hype in the markets and great anticipation of business opportunities following the Soccer World Cup hosted by South Africa in 2010. CEO of the George Business Chamber, Ingrid Cronje (right) and Mary-Anne Loose, chamber secretary, clinking to the future of George.

During her time, changes were introduced that included training workshops for businesses, and this was later extended to include facilitation of training for youth and women. Her proudest moments at the chamber were when they were named National Business Chamber of the Year - not once but twice!

She has learned many things over the past decade, especially the importance of relationships. "Integrity, respect and honesty are very important aspects if you want to build relationships."

Ingrid says Georgians have had to face many challenges such as floods, fires, drought and Covid-19, but always handle every disaster with resilience.

Covid-19 is a massive challenge to all and the chamber had to adapt their operating model.

Although she is retiring, she has no plans to sit at home. For the first few months, she and her husband, Tommy, will tour the country, and after their travels, she wishes to get involved in training and development - her passion. Ingrid Cronje (far left) at her first AGM in 2011 with board and executive committee members.

Ingrid derived immense satisfaction from her work at the chamber. Helping people grow their businesses, was a joy.

Her successor, who will be announced in due course, has big shoes to fill.

Everyone at George Herald wishes Ingrid the very best for the future and look forward to writing about her new activities in George for many decades to come. 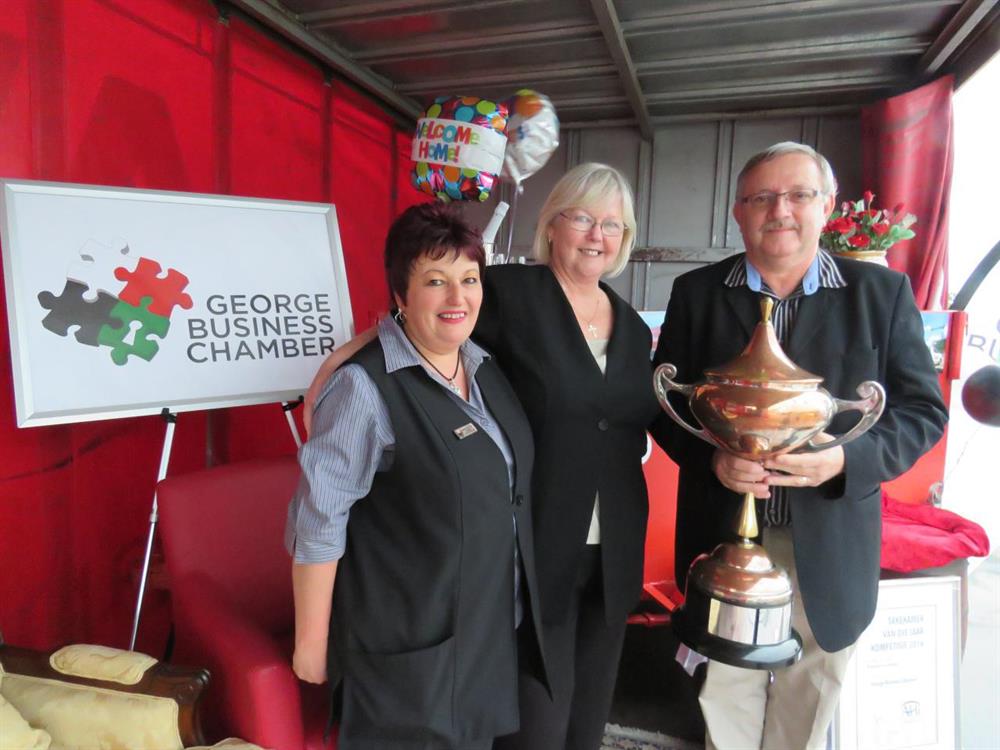 With the national trophy the George Business Chamber won twice over the past decade, are from left Mary-Anne Loose, chamber secretary, CEO Ingrid Cronjé and former Chairman Willie Cilliers.