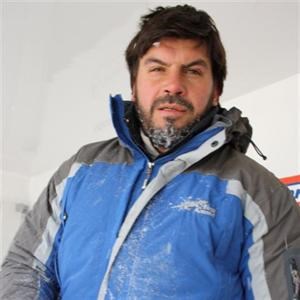 GEORGE NEWS - After 15 minutes in the -25° fridge I could not feel my fingers anymore, let alone hold a dictaphone. After 20 minutes, I admitted defeat and evacuated the cooler box that held South African adventurer, author, motivational speaker and charity fundrai-ser, Riaan Manser.

He is a big man, with an even bigger heart. Welcoming visitors to his icy home, he had some fantastic stories to tell (admitting that the freezing temperatures were affecting his memory), and passionately spoke about past and future adventures.
Last week Manser visited George as he made his eight day charity trek to Newlands stadium in Cape Town.

During this trip, which finished on Sa-turday and allowed Riaan to attend the rugby, much time was spent on his exercise equipment to keep not only busy, but warm. Riaan also personally thanked public donators and welcomed a variety of folk to experience his chilly container, even though he "was getting really sick from the drastic temperatures [and] had a fever and migraine almost the entire trip," his PA, Shea van Tonder said.

But what can a tough man like Riaan not do without? Understandably it was "coffee [and] his ultra warm First Ascent clothing" Ms van Tonder added. Although showering could not be a priority, Riaan actually resorted to cleaning with bottled water as the shower water froze in the pipes and could not reach the heater to be warmed up!
This was, however, a small trek compared to his previous ones that saw him cycle the 36 500 km perimeter of Africa for two years, then spend 11 months kayaking around the island of Madagascar.

But what do you think about for hours on a bicycle or when propelling a kayak? Cycling, Riaan says, allows one time to "think about many things, but during the latter, I can’t remember many times daydreaming!"

Riaan departs for his next adventure, a four-month trip to Iceland, on 16 March. For the first time he will have an adventure partner in his friend, Dan Skinstad. Dan, whose brother is rugby player, Bob, is challenged by cerebral palsy and "is just an awesome guy," according to Riaan. He firmly believes that "Dan and I will inspire people where they will be silenced."
But where did all these adventures begin? Riaan describes his rather treacherous cycle route to school, "between Richard’s Bay and the suburb where our school was," the Ferelli Alley trail. Populated by crocodiles and ‘likkewaans’, Riaan literally rode into some of the indigenous population, serving him well on his African adventure and earning him the title of Adventurer of the Year in 2006 and 2009.

Riaan also remembers an unscheduled stop at Cape Town’s airport after a day in the office to book the next flight to anywhere in Africa. The destination happened to be to Malawi’s Lilongwe, where he arrived with his backpack and "zip plans". It is this live-life-to-the-full attitude, to not just talk but DO, that saw Riaan take on this chilly trip for charity.

The full total of his eight day fundraising efforts are still being calculated, but the South African public donated almost R100 000 alone during their visits to Riaan’s fridge home (sms donations are still being tallied).
This money will go towards sporting equipment for underprivileged children. Always "an underdog supporter" (even though he supports the Sharks!) he says that people like Dan inspire him.
This should certainly be an adventure of a lifetime and everybody wishes them safety and a cooler box filled with warm, memorable moments of Iceland.

Visit www.riaanmanser.com for further information including Around Africa on my bicycle, Around Madagascar on my kayak and the planned documentary for his Around Iceland on inspiration journey.


Riaan Manser spent a lot of time on his exercise machines simply to stay warm.