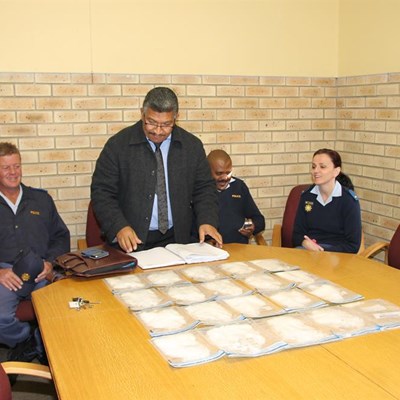 Captain Gerrie Steenkamp (left), Captain Malcolm Pojie, Captain Nzoli Mtabati and Major Annemarie Delport with the parcels of Tik that would have been distributed in George.
GEORGE NEWS - The Thembalethu Police confiscated 2kg of pure Tik (crystal meth) worth R750 000 in a house in Zone 8 during a raid on Monday 27 July. The drugs were destined for sale in the George area.
Captain Malcolm Pojie, Southern Cape Police spokesperson, said this is one of the biggest drug busts in the area in recent times. "The street value could be double the figure as it is pure crystal meth that would have been extended with other substances and then sold on the street."
Pojie confirmed that a 56-year-old partially sighted woman appeared in the Thembalethu Magistrate's Court on Tuesday 28 July on a charge of dealing in Tik.
The Tik was found hidden in two cereal boxes when Ciara, a border collie police dog under the guidance of Captain Gerrie Steenkamp, led the police to a washing basket where the Tik was concealed.
Another man, a foreign national, was arrested with seven Tik 'bankies' (plastic bank money bags) in his possession and was due to appear in court yesterday.
The operation was a joint effort of the local police station with members of the Public Order Policing (POPS) and the Outeniqua K9 Dog Unit in George.
Pojie appealed to the community to continue supplying the police with information so that "we can fight the scourge of substance abuse that is destroying our communities. We can only get the upper-hand if we work together."
Click here for a previous news flash: Partially sighted woman in court for Tik
Read the latest here.