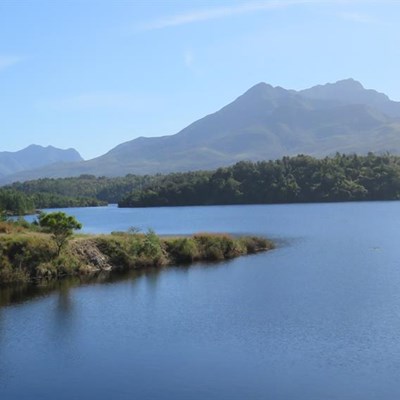 The Garden Route Dam has to provide water for a rapidly growing population. The George Municipality recently spelled out their water provision plans for George. Photos: Pauline Lourens
GEORGE NEWS - The devastating drought in Southern Africa - described as the worst in living memory - has raised concerns that George may one day be faced with a severe water crisis again, as was the case from 2009 to 2011.
One reader posed the questions: "What are we doing to ensure that we will not be in the same dilemma as those who are currently without water? What are we doing to provide for a growing population? For a long time there was talk of building a higher dam wall. What has happened to that project?"
Measures for water surety
Director of Civil Engineering Services Harold Basson, says the Department of Civil Engineering Services is presently in the process of appointing a consulting engineer for the project to raise the overflow of the dam. The planned programme for completion of construction is the end of 2017.
"This raising of the overflow will conclude the first phase of the water source master plan of 2007. The current assured yield of the Garden Route Dam with the Kaaimans Pump Station in operation is 41,37 million liters per day."
He said three projects are incorporated into the long-term water resource plan and their effect on the water supply capacity are as follows:
Re-use Treated Effluent Phase 1 will provide a total capacity of 49,18 million liters per day. This plant was completed in 2010 and is not presently used but is maintained and ready to be used when needed.
Malgas Pump Scheme adds an extra 6,57 million liters a day bringing the total capacity to 55,75 million liters per day. This project was completed in 2010 and forms part of the existing supply scheme.
The raising of the Garden Route Dam spillway will bring the total capacity to 59,04 million liters per day and the project is planned for completion by the end of 2017.
"In other words, when all these measures are in place it will increase George's capacity to 59,04 million liters per day. The present average consumption of George is 28,5 million liters per day. By the end of 2017 George will have a capacity of approximately double the present consumption.
"The raising of the Garden Route Dam spillway adds 5,5% to the assured yield of the water source system of George. It is therefore not a major addition to the capacity, but it is an important conclusion of the implementation of the planning that was started many years ago. The aim of this plan is to ensure that George is able to sustain growth for the foreseeable future. With the present growth patterns, these capacities will be sufficient until at least 2028.
The provision of water is critical for the economic growth of the area and George is in a good position to accommodate economic growth. The master plan makes provision for further projects that will increase the capacity even more after that date."
Licences
In January 2015, the George Herald reported: The reason why it took seven years for the Department of Water Affairs to approve the increase in capacity measures is likely because they processed all the water use licences of George simultaneously. The result is that the present licence includes all the water uses that are utilised by George. Permission to pump water from the Malgas River to the Garden Route Dam forms part of the licence and part of the long term-water resource plan. The licence includes the following schemes: Swart River Dam, Garden Route Dam, Malgas Pumping Scheme and Kaaimans Pumping Scheme.
Scrambling for water
A University of Stellenbosch study into the drought disaster that affected the Eden and Central Karoo Districts between 2009 and 2011 was commissioned by the Western Cape Provincial Disaster Management Centre.
According to this report, it was the extraordinary achievements in water conservation demand management that saved the day. This was because the majority of additional water supply projects did not come online until late 2010-2011, after the drought had broken. In that period R570-million in drought relief was allocated to the Eden District Region, of which a portion was spent on, among others, supplying 2 434 farms with fodder relief by the Provincial Department of Agriculture, located primarily in the Eden District (Oudtshoorn and Hessequa), with more than 900 farms in Hessequa alone allocated fodder relief vouchers.
Eden District Municipality Disaster Management's Gerhard Otto said this week R1-billion has been spent since then in funding the upgrading of the region's water capacity. This includes money spent by PetroSA on a desalination plant.
To read a report by the University of Stellenbosch on drought management titled 'The Scramble for water' done in July 2012 visit www.westerncape.gov.za/text/2012/11/eden-and-central-karoo-drought-disaster-2009-2011.pdf. The R9,9-million project raising the Garden Route Dam's overflow will be completed by the end of 2017.
ARTICLE: PAULINE LOURENS, GEORGE HERALD JOURNALIST
'We bring you the latest George, Garden Route news'