George is most eco-friendly city in SA 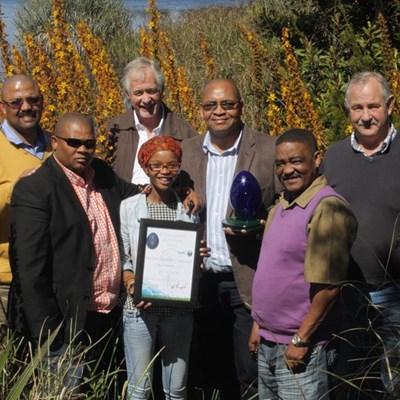 Proud representatives of the most environmentally friendly city in South Africa with their Eco-Logic Award, from left: Wessel Robertson (acting manager of Cleansing and Environmental Services), Shudley Windvogel (mayor's office), Giel Goosen (senior manager of Environmental Services and Sport Development), Grace Notshokovu (coordinator of Greenest Municipality), Executive Mayor Charles Standers (back), Elias Draghoender (project manager at Cleansing Services) and Radie Loubser (acting manager of Parks and Recreation). Photo: Alida de Beer
GEORGE NEWS - It is official. George Municipality is the most environmentally friendly local authority in the country after taking the laurels at the Eco-Logic Awards in the division for municipalities.

"The win was completely unexpected," said a pleased Giel Goosen, senior manager of Environmental Services and Sport Development, who attended the awards ceremony last week at Maropeng at the Cradle of Humankind. "We were one of five finalists, the others being Cape Town, eThekwini, Ekurhuleni and Mossel Bay. We certainly did not expect to be first with such big municipalities in the running. I was taken by complete surprise when they announced George as the winner."

The Eco-Logic awards are presented by Enviropaedia in association with SABC3 and are aimed at promoting a more sustainable society on all levels. Judging is done in various categories for which businesses, schools and non-governmental organisations may enter.

A delighted Municipal Manager, Trevor Botha, said George Municipality strives not only to deliver excellent service, but to do so in the most sustainable and environmentally sensitive manner that they practically can. "George has received numerous environmental awards in recent years and aims to continue to be an inspirational leader in the field of sustainable city management. I am extremely proud of our achievements and especially of our officials who consistently take the lead."

Goosen said their submission to the panel of judges included a report on the normal day-to-day management activities and projects of the municipality. "It is not as if we have gone out and done anything special for the award's sake."

Among these count an intensified tree planting programme started a decade ago. About 30 000 trees have since been planted all over the city. The entrances to the city have also been beautified and about 60km of river courses through the city have been cleaned. The plantation between Denneoord and the Garden Route Dam was cleared in 2003 and water catchment areas burned for increased water runoff. Waste management systems include hand litter picking by subcontractors (a project that also creates jobs), the continued clearing of dumpsites in residental areas on a daily basis and waste recycling systems that are in place. "There is, for example, a repository for the disposal of used motor oil at the rubbish docking station at Gwaiing. A warehouse at a private institution recycles energy saving and other bulbs and electronic waste that contains heavy metals. We furthermore intend to close the landfill site, and start with the composting of green waste and recycling of building material. Environmental officers constantly give guidance to the public on the greening and safe disposal of waste."

He said the municipality took steps to sort out problems it has with pollution in beach areas. "People were used to braaiing anywhere and toilet facilities were vandalised. The council as a result decided to limit the braai spots to beaches at Herold's Bay, Victoria Bay, Leentjiesklip and Gwaiing."

Botha also highlighted a project launched recently together with Eden Waste Forum where all schools in the municipal area were visited to ensure that systems are in place at schools for getting rid of chemicals in their laboratories in a safe manner.
"The municipality also supports the Garden Route Botanical Gardens Trust financially and in other ways, and this gem is especially a great asset to the town."