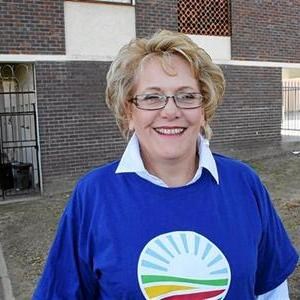 Iona Kritzinger went public with her fears about crime spiralling out of control on Friday, during a talk-show, Praat Saam, aired by SABC's RSG radio.
GEORGE NEWS - Many people regard George as the last outpost - the final safe haven from crime.

However, this perception has undergone a drastic change following a spate of violent crimes, in which citizens were robbed, injured and killed.

She stated, "George is being hit by a crime wave. We have an excellent police force with dedicated people, but residents have lost faith in the police's ability to cope, especially in view of the shortage of response vehicles."

Addressing the interviewer Lynette Francis, she said crime statistics were being downplayed, and as a result decision makers had a skewed picture. In an interview with the George Herald, Kritzinger said she was dismayed that the Western Cape SAP leadership had decided to withdraw a patrol car from each of the police sectors. This was clearly affecting local policemen and women's efficacy. "It is imperative that the correct crime stats be made known so that more police can be deployed."

Drug capital
Kritzinger told the George Herald that the Southern Cape had become drug syndicates' headquarters. According to her one only needed to look at the volumes of drugs occasionally being confiscated near our local ports, to realise that security forces were not geared to halt the ongoing smuggling. She added that she had borne the brunt of burglaries - one burglar had the audacity to climb through her window while she was in the house. Kritzinger said she did not profess to have solutions to the region's crime.

The CCTV surveillance cameras, which cost the Western Cape in the region of R200-million, had been exclusively purchased to monitor the new traffic systems. "I do feel there may be a slight spin-off on account of criminals now knowing there are cameras in town. I appeal to business folk who feel that the surveillance system should be deployed to monitor the CBD, to work together with us, and help finance this crime surveillance."

Panga knifeman
Remarking on crime spiralling out of control, Capetonian Prof David Bradfield, said this week, his dreams for retiring to his Victoria Bay Heights holiday home had been shattered. This, after his security guard had nearly been killed during a spate of burglaries at his home.

He believes that his house had been targeted by one audacious burglar, who keeps on carrying out daring smash-and-grab raids and disappearing into the thick undergrowth to outmanoeuvre the two armed response security companies he had engaged to protect his home. "I believe that the burglar who stole two panga knives from my home, used one of them on the teenage surfers, Daniël Hart and Taylor Johnson (on 9 July at noon, as reported in last week's issue). Criminals are also using a path leading up to my house as an escape route and a place where they can lie low, away from the police."

Daniël's father Gary Hart said the children had identified one of the regular car guards at Victoria Bay as being their assailant. He reported this to the police investigating officer and was awaiting action.

Escaped
An elderly couple, robbed at knife point at their Victoria Bay Heights cottage last week, said they feel lucky to be alive. The attacker forced Cherry Louw to drive him to Conville, but her husband Dave managed to untie himself and alert the police. The police reacted with alacrity and arres-ted the man in Conville - just as Cherry had stopped the car.

Action plan
Eden District Municipal Manager Godfrey Louw said he will be insisting on high level talks with the police, and a plan of action for crime-riddled Victoria Bay. Security specialist Michael Hills, an ex police detective, said he was busy arranging emergency meetings in various sectors to alert residents of his plan to combat crime.

Captain FC van Wyk, from the SAPS Provincial Media Centre said every effort is made to address the crime situation in George through focused intelligence driven operations. "Recources to police stations are allocated according to set criteria. Crime prevention is not only done by sector vehicles."