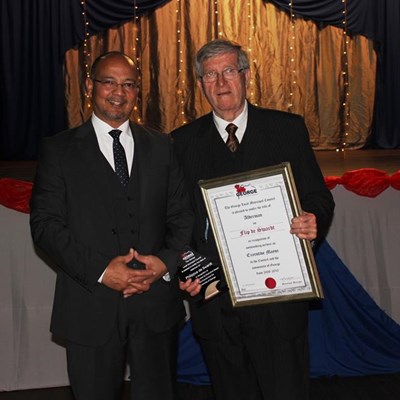 Alderman Phillip de Swardt
GEORGE NEWS - The colourful George City Council Speaker Mercia Draghoender hosted a farewell in honour of George municipal councillors at which honorary titles were bestowed upon councillors during a ceremony in the George Civic Centre on Thursday 21 July.
The five councillors, who served in executive positions including the mayor, received the titles of aldermen in recognition of outstanding service to the council and community of George.
At the time of the farewell function, Cllr Charles Standers was still serving as executive mayor, but he did not attend the function, and he resigned the following day, on Friday 22 July, amid great controversy.
The honorary title of 'Alderman' was bestowed upon the following councillors: Charlie Williams who served as chairperson of the executive committee from 1995 to 2000; Bazil Petrus who served as mayor from 2003 to 2008; Phillipus de Swardt who served as executive mayor from 2008 to 2010; Draghoender who served briefly as executive mayor in 2010 and Standers who served as executive mayor from 2011 to 2016.
Jan-Erik Swart received the city council's illuminated address award for excellent service to George in maintaining consistent and outstanding musical standards as the choir director of the South Cape Children's Choir on both national and international platforms.
According to the George Municipality Media Liaison Officer Chantel Edwards-Close each of the South Cape Children's Choir members received an arts award and they also performed on the evening.
Click here for a photo gallery.
The George City Council bestowed an arts award on each of the members of the South Cape Children's Choir.
'We bring you the latest George, Garden Route news'