Cyril Starbuck points out a nasty-looking corner in an alley between an old church building and the back of a fish and chips shop.

GEORGE NEWS - Dirty sidewalks, overgrown weeds and filth. These are all clearly visible during a visit to the centre of town, in the vicinity of Market and Doneraile Square.

Cyril Starbuck, a handyman who tends to residential units in Market Square, invited the George Herald to the site for a closer inspection.

Weeds have been growing wild between buildings, the area is littered with rubbish and garden waste and a very nasty-looking corner catches the eye in an alley between an old church building and the back of a fish and chips shop.

He pointed out an object which he identified as a nappy squished next to a sidewalk in Doneraile Square, which he believes has been there for at least two months.

"When I see workers, I see eight men and one spade," he said.

According to Starbuck he has given up attempting to notify George Municipality's Department of Environmental Services about the dire situation.

"The lady at reception confirmed that the messages are passed on, but unfortunately the job just doesn't get done. I've repeatedly asked for help with the weeds and the message we get is that they've been there already and sprayed the weeds. This is nonsense. The gates are locked and they have to ask for a key, which they haven't done."

Municipal spokesperson Chantel Edwards-Klose said Starbuck's complaint was referred to the Cleansing Department "for action and the supervisor for the area has been notified with regards to the comments and will address with the cleaners".

She said the area falls within the Central Business District and is cleaned every Monday, Wednesday and Friday, "therefore it is highly unlikely the 'nappy' has been there for two months given the cleaning schedule".

Edwards-Klose said the sidewalk programme will address the weeds.

n Residents can submit complaints on illegal dumping, sidewalk weeds and other refuse issues to the Department of Environmental Services at 82 Meade Street or contact them on 044 802 2900. 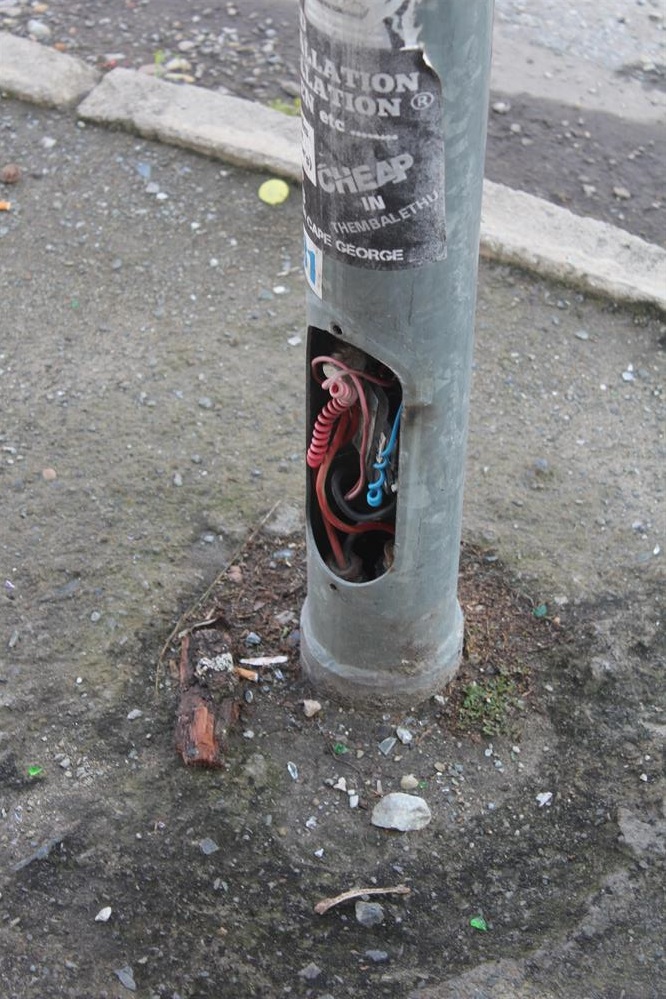 Exposed wiring on a streetlight in Market Square. An area between residential units that is overgrown with weeds.