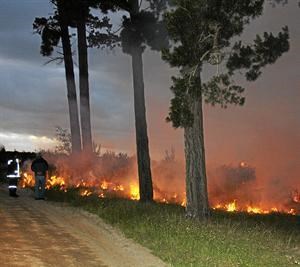 According to Radie Laubscher, project manager at the Parks and Gardens section of the George Municipality, this was a precautionary measure to reduce the threat of fire in case of extreme conditions.

"The fire season starts in December. Homeless people make fires and alien trees are also a problem. In 2005 a fire started on the mountain and raged right through the dam area up to Kraaibosch." Only the section north of the access road along the edge of the dam was set alight. The southern side will be burned in March.

According to Neels Barnard, George Fire Department head, they had been keeping an eye on the weather forecast for the past two weeks. "We had to be fairly sure that the wind would not blow in the town's direction while the fire was going."

The wind turned in a southwesterly direction late on Monday night and started carrying smoke over nearby suburbs. Barnard said animals had enough time to move out of the area after the fire was started.

On Monday during the day, they had seen a number of bushbuck which had moved on to the southern side of the road.