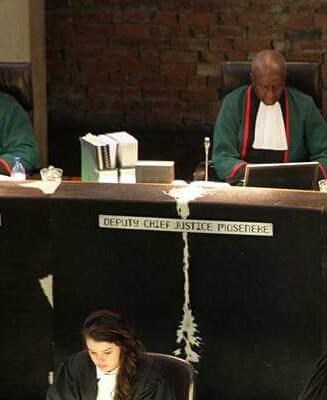 Jenalee Harrison at work in the Concourt supporting former Deputy Chief Justice Dikgang Moseneke (on the bench).
GEORGE NEWS - Former Yorkie Jenalee Harrison, a law researcher at the Constitutional Court in the office of the retiring Deputy Chief Justice Dikgang Moseneke, will attend the prestigious alumni event to be held at the Constitutional Court of South Africa on Saturday 28 May.
Harrison matriculated at York High in 2008 and was appointed as a law researcher last year. Her responsibility is to write legal opinions for the Deputy Chief Justice and accompany him to court. She holds a Bachelor of Science degree after majoring in genetics and advanced biochemistry, as well as a post-graduate LLB degree from Stellenbosch University.
"I have the utmost praise and respect for York High and its teachers for installing a drive for academic success in their students and encouraging them to find their passion. The teachers and staff at York are special. I will always be indebted to them for the support and encouragement they provided to me.
In her final year of law studies, she was awarded the Anton Mostert Intellectual Property Prize and worked part-time at the Legal Aid Clinic in Stellenbosch.
While at the Constitutional Court she was the liaison commissioner for the Venice Commission which acts as the Council of Europe's advisory body on constitutional matters. She worked closely with Justice Edwin Cameron, the Constitutional Court representative to edit responses to member states of the council.
Deputy Chief Justice Moseneke has retired after serving 15 years on the Constitutional Court.
He was imprisoned on Robben Island at the age of 15 for political activities during the apartheid years and was part of the team that drafted the interim constitution.
'We bring you the latest George, Garden Route news'