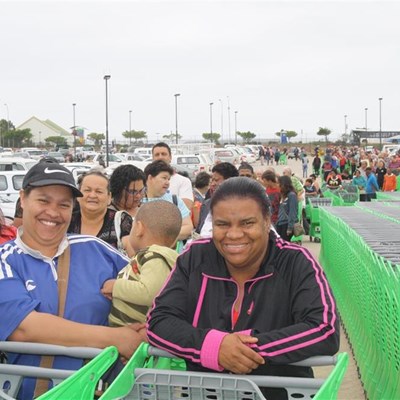 Shoppers queue to the border of the parking lot. Photo: Pauline Lourens
GEORGE NEWS & VIDEO - Shoppers started queuing from before 08:00 this morning for the enticing opening specials at Checkers Hyper, one of an array of 45 shops that opened for business this morning after the ribbon cutting of the Eden Meander Lifestyle Centre.

Shop owners, the developers and builders breathed a sigh of relief after the last frantic rush of the past week and into the early hours of this morning to welcome their first customers.

Addressing a group of invited guests seated in the open air at the Checkers Hyper entrance, Tibo Terblanche, a director of developers Laritza Investments praised the mammoth effort of all roleplayers to make the R360-million development a reality. It was a decade ago that the dream was birthed when Garden Route Mall Investments contacted Cumulus for a joint venture. Together they formed Laritza Investments to give life to Eden Meander.

He praised the construction companies, Semper Prima and Marsilio Projects who made the deadline despite 48 rain days since October last year when construction of the 28 704m² centre began.

The developers of Eden Meander in front of one of the entrances after the official opening this morning, from left: Chris Roodt, Gerrie Cronjé, André Bauermeister, Tibo Terblanche en Loot Steyn.

George Mayor, Charles Standers who cut the ribbon, said the centre is a huge gain for George, the region, and beyond. It is a massive investment in the economy with hundreds of jobs created and will contribute significantly towards sustainable growth in the area. "The George Municipality is committed to create a climate and conditions in which business can flourish. We are proud to be associated with this grand brand."

By the time the doors to the centre opened, the queue with the characteristic bright green Checkers Hyper trolleys snaked across the parking lot up to its border, many shoppers with their noses buried in the flyers advertising the specials.

Shops like House & Home and DZ also had to handle queues of shoppers eager to make their purchase.


A constant stream of cars were still arriving two hours after opening.
Watch two videos below.
Click here for a photo gallery.