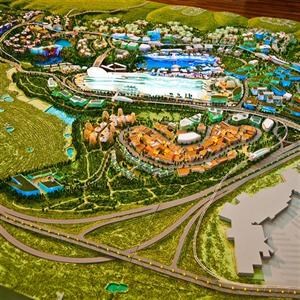 GEORGE NEWS - In response to a query from a reader regarding the progress being made with the Destiny Africa development, the George Herald spoke to the project director, Fred Brown.

The proposed project, launched officially in 2009, is the size and format of a mini-city, covering 437 hectares east of George (opposite the Garden Route Mall and bordering on Thembalethu).

Its development will cost in the region of R45-billion.

Brown said during a visit to his office that they are in the process of negotiating with BEE investors, one of the conditions of approval for the development. The project is being divided into precincts and conceptual plans of these will be drawn up before road shows will be embarked on to start negotiations with possible operators. He did not want to identify BEE groups that may be interested.

Brown said the recession has had an impact on the progress made, but he was upbeat and stated that they are perfectly positioned for the next economic upswing.

Once construction begins, it will be done in phases with a start being made with the convention centre as well as residential, commercial and hotel accommodation components.

World-class convention centre
A world-class international convention and exhibition centre will form the core of the development and will be a huge draw card for overseas visitors. Also featuring a knowledge city, creative university, research facilities, a sport centre and sport science centre, medical tourism section and schools, Destiny Africa is foreseen to be the biggest private endeavour on this continent.

It will have a massive residential section comprising 7 000 units, visitor accommodation offered in several waterfront hotels and a guest lodge village, recreation facilities as well as a tourist village with, amongst others, cinemas, restaurants, coffee shops and a flea market.

The commercial component will contain a shopping centre and leisure ‘shoppertainment’ facility.

An estimated 50 000 work opportunities will be created through the project and the developers foresee a massive growth in the local GDP as a result of investment in the development.

Western Cape Premier Helen Zille launched the project at a function in George in 2009 where the VIP guest list included a delegation of 30 Singaporeans and Chinese investors who showed interest.