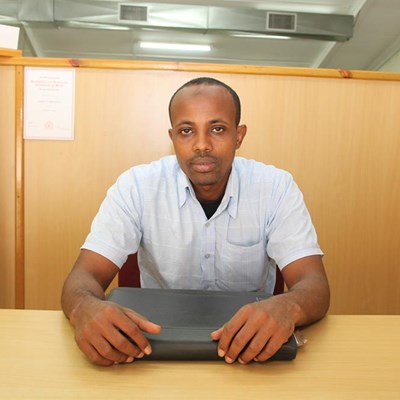 Somali businessman Hussein Ali Liban warns foreign owned shopkeepers against fraudsters pretending to be from the George Municipality. Photo: Myron Rabinowitz
GEORGE NEWS - Local Somali businessman Hussein Ali Liban says that local fraudsters are trying to extort money from foreign shop owners by claiming to be municipal officials that have been sent to legalise their businesses.
"Last week a fellow Somali shop owner contacted me saying that there is a man at his shop asking if he has a licence to operate a business, to which he replied 'no'. The man then said that he will issue him with one. Luckily for my friend, who doesn't understand the local languages that well, said he needs help with translation and called me for assistance," said Ali.
Ali rushed to his friend's shop and confronted the man. "He claimed that he was from the George Municipality's Department of Human Settlements. When I asked him for identification, he produced a document 'Application submission and Procedural Requirements', but could not produce any form of municipal identification."
Once confronted the man left without saying a word.
"This type of strong-arming has been going on for years, but now it is getting more professional and sophisticated tactics are being used against us."
Armed with a photo on his phone, Ali immediately went to the Municipality's Human Settlements Department and asked if they have officials visiting foreign owned shops. "The official said this was not the case, so I gave them the photo and left. They said they would investigate the matter."
Chantel Edwards-Klose, Media Liaison Officer for the George Municipality confirms: "The 'so-called' official in the photograph is not an employee of the Directorate: Human Settlements, Land Affairs and Planning.
"The normal procedure to apply for a business licence is for the applicant to visit the municipal office and lodge the application there with the relevant official. Any transaction outside the offices of the municipality by individuals claiming to be in the employ of the municipality should be reported immediately.
"Under no circumstances can an official application be administered in the field. Residents who need to verify the credentials of individuals claiming to be municipal officials can contact the municipal offices at 044 801 9385 for verification." said Edwards-Klose. Ali has reported the matter to the police.
"I want to make shop owners aware of these tricks and appeal to them to check with the relevant authorities if the individual is genuine or an imposter. I am available to assist," said Ali.
ARTICLE AND PHOTO: MYRON RABINOWITZ, GEORGE HERALD JOURNALIST
'We bring you the latest George, Garden Route news'