Bushbuck rescued next to busy road 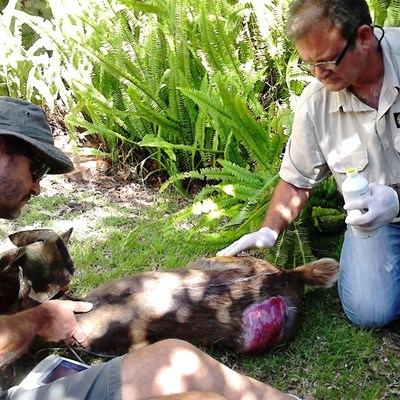 A George vet specialising in wildlife, Dr JC Botha treats the young bushbuck on Monday while Carlo van Tonder of Cape Nature assists.
GEORGE NEWS - A young bushbuck ram, which wandered into a fenced parking lot at Pam Golding in Davidson Road on Monday, had to be darted by a local vet and transported to safety as part of a delicate operation to ensure its safety as well as the safety of motorists caught up in early morning traffic.
Pam Golding's office manager, Stephen Murray, immediately contacted Cape Nature when he saw the predicament of the trapped animal. Barend le Roux and Carlo van Tonder were soon on the spot and called in the help of Cape Eco Wildlife vet, Dr JC Botha.
"The young bushbuck was in danger of dashing against the palisades and hurting itself - it had already sustained erosive skin lesions trying to escape. If he did manage to escape, he would have landed in the morning rush hour."
The sedated animal was carefully placed in a box and taken to the wildlife rehab centre of Fienie and Johan Yssel in Wilderness.
The advice of Le Roux and Van Tonder is (in general when a bushbuck wanders into a garden on the borders of the town) to leave them be and not to try and corner them.
This causes unnecessary stress. Generally, it will wander back to its own territory in the evening. Just keep your dogs locked away or in a separate area of the garden where they cannot harm the buck.
"Normally it is not necessary to intervene as buck do tend to wander from the forest into the gardens of George and Wilderness, but yesterday was an exception due to the busy location in the centre of town where the animal got itself trapped", explained the two officers.
Dr Botha warned: "If you do spot wildlife in your garden, avoid making a noise and don't approach them, as they will try to escape and potentially injure themselves." The all-hour telephone number for Cape Nature is 044 803 5300.
ARTICLE: PAULINE LOURENS, GEORGE HERALD JOURNALIST
'We bring you the latest George, Garden Route news'