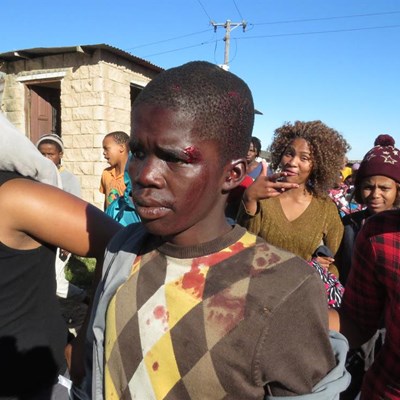 A bloodied Akhona Matiya sustained several wounds during the vigilante court.
GEORGE NEWS - Vigilante justice reared its head on Saturday 20 June as residents apprehended and manhandled an alleged thief in Lawaaikamp.
A bloodied Akhona Matiya, who is 17-years-old, was bound and escorted through the streets of Lawaaikamp on Saturday morning as fed-up residents forced him to point out where he sold the items he allegedly stole.
According to Xola Blou, Matiya broke into her house and stole items worth R5 000.
"I knew it was him when I caught him wearing the same tekkies that were stolen from my house. It's not the first time that he broke into my house," said Blou.
Although some of the items were recovered from Matiya, the community showed no mercy as a Blackberry cellphone was still missing. During the parade Matiya pointed to a house and said he sold the phone to a foreign national.
By the time residents and a police convoy arrived at the house, neither the phone nor the foreign national could be found. Matiya was then put on trial in a street court, which was observed by the police, and he confessed some of the crimes he had committed.
"I was also responsible for the recent break-in at Mzoxolo Primary School and sold the food to a nearby Somalian owned shop," said Matiya. The community then raised their concerns about foreign nationals who buy stolen goods and also about the slow response of the police in dealing with crime.
Solomon Mkruqule, one of the so-called prosecutors at the street court, said the community had no choice but to take the law into their own hands. "The community is tired because the police take time to arrive at a crime scene. If a criminal is arrested they come back after a day or two and commit the same crimes," said Mkruqule.
According to Lieutenant Sam, of the Conville Police, no case has been opened. "The complainant [Xola Blou] did not open a case. Our members were looking for the complainant but she left the station without informing anyone. The suspect had to be released because no case was opened against him," said Lieutenant Sam.
It is believed that Blou did not press char-ges as she feared that in turn the alleged thief would open a case of assault against her.
Meanwhile, Raymond Eagan, the headmaster of Mzoxolo Primary School, told the George Herald that Matiya confessed to the break-in at the school in his presence.
"The investigating officer called me to the Conville Police Station to meet with the alleged suspect. Matiya confessed and told me how he managed to break into the school. The police did not arrest him, but are still investigating and said Matiya will appear in court soon."
Click here for a previous news flash.

Pandemonium broke loose in Lawaaikamp when the community took the law into their own hands.