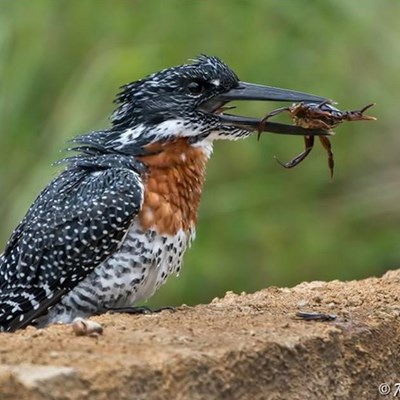 Giant kingfisher. (Photo: National Geographic)
GARDEN ROUTE NEWS - Botlierskop Private Game Reserve near Mossel Bay has opened a new bird hide on the banks of the Moordkuil River, which runs through its property.

Staff of the reserve have built up a bird list of more than 200 species including the Knysna loerie, the long crested eagle, the swee waxbill, fish eagles, Verreaux's (black) eagle, the martial eagle, the black harrier, the black headed heron, the red knobbed coot, the common moorhen, pied, malachite and giant kingfishers.

"Botlierskop is a great birding destination because it's got a variety of habitat types including wetlands, dams, coastal thicket and fynbos," said General Manager, Francina Terblanche.

Mossel Bay Tourism's Marcia Holm said that birding is a growing niche in the tourism industry and that Mossel Bay is 'full of surprises' for birders.

Corporate sponsorship
"It's good to see that our tourism products are starting to provide facilities for bird lovers and we're sure that more will follow," said Holm.

Pinnacle Conservation's Manager, Aiden Beck, agreed that Mossel Bay offers superb opportunities for birding.
"We're fortunate that we've got a number of estuaries that attract a wide variety of birds including greater flamingoes, which have been visiting the Tweekuilen Estuary for the last three or four months."

Beck said that Pinnacle Conservation had coordinated the Mossel Bay Environmental Partnership's R2-million Estuary Restoration Project, which had rehabilitated most of the estuaries along Mossel Bay's coast between June 2011 and the end of 2012. Sponsored by PetroSA and instituted by the Mossel Bay Municipality, the project targeted the alien vegetation, which impacts negatively on the physical and biological processes of the estuaries. It also restored natural, endemic vegetation to the river banks and so returned them to a healthy, natural state.

"We've already noticed that the bird-life is returning to these areas," said Beck. "And the pathways that we've opened along the banks of the estuaries have made them more accessible for birders."

Pinnacle Conservation also helps with the management of the 130ha reserve attached to the PetroSA Refinery, about 10km west of Mossel Bay. It's got quite a bit of fresh water and we've seen the flamingoes there too.

Ironically, he said, the Hartenbos Sewer Works provides some of the best birding in the area.

Birding at Boggoms
Fred Orban, a member of the board of Mossel Bay Tourism and the owner of the Oystercatcher Trail, said that the Boggomsbaai area, which lies about 30km west of Mossel Bay, and which forms a focal point of the trail, also offers superb birding.

"We've had hundreds of flamingoes on the Langvlei, which is situated on the flood plain of the Gouritz River, and we often see huge numbers of blue cranes in this area at this time of year. On one occasion we estimated that there were between 400 and 600 individuals in a single area between Boggomsbaai and the Gouritz River mouth."

The Gouritz River forms the spine of the Gouritz Cluster Biosphere Reserve (GCBR), which stretches along the coast from the Great Brak River in the east to the Breede River in the west and inland over the mountains to Montagu, Prince Albert and Uniondale. The Government of South Africa has nominated the GCBR for biosphere reserve status under the 'Man and the Biosphere Programme' of the United Nations Educational, Scientific and Cultural Organisation (Unesco).

"We expect that the GCBR will attract an enormous amount of bird tourism in the future," said Orban.
Holm said that inland birding is as rewarding as coastal birding in Mossel Bay.
The new bird hide at Botlierskop is open only to the reserve's overnight guests.