Be responsible and respect marine life 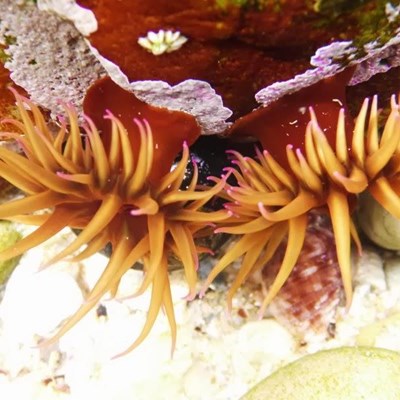 Exploring rock pools is great fun, but bear in mind that there is marine life that needs to be treated with respect. Photo: Oceans Research.
GARDEN ROUTE NEWS - Holidaymakers are still enjoying the Garden Route coastal area with every intention to make the most of the summer season.
Most certainly a huge source of entertainment during holidays will be recreational angling, while children are having fun exploring rock pools.
Marine specialist Enrico Gennari, director at Oceans Research in Mossel Bay, who also assists in the monitoring of great white sharks in the bay, gave some advice to anglers regarding being responsible, giving pointers on a code of conduct especially when hooking a shark.
"Remove all hooks and line, if possible. If it is not possible to remove the hook, cut the trace as short as possible to minimise the chance of entanglement.
"Keep a tight trace line at all times so the animal cannot entangle itself in the trace and try to keep the trace line away from the body. This will also minimise the entanglement risk.
"Try not to use 'J-hooks'. J-hooks can be easily swallowed and may cause permanent damage to the animals' stomachs and/or intestines. Instead, try to use circle hooks. Even better, a barbless hook will inflict the least damage.
"If you do not like the idea of barbless hooks, try flattening the barb instead.
"Try to minimise the fight time. This will ensure the shark's acidosis levels do not rise to extreme levels and its ability to recover will be much greater.
"Do not use a gaff to land the shark. Instead, reel it in as close as possible and use a stretcher to carry it.
"Do not drag, carry or hold a shark by its tail.
"Do not drag the shark over a rocky surface. This will cause damage to both its skin and internal organs. If there is sand nearby, land your catch there instead.
"Try not to take the shark out of the water to measure or weigh it. A shark's internal organs (liver, heart, genital organs, etc) are not held in place like a human's. Instead, they are specially designed to be supported by water and their organs are easily crushed when out of their environment. Use your rod (or similar item) to measure the length of the animal. Length-weight conversions exist for most recreationally caught elasmobranch species, so you can always determine the weight afterward.
"Do not carry or drag the shark by its gill slits, eyes, spiracles or any other opening. Sharks require all their uniquely designed senses to hunt and manoeuvre effectively. Their gills also enable them to breathe and any damage to the gill slits may result in a slow death by suffocation.
"Minimise the shark's time out of the water if you must take it out of the water.
"If you must remove the shark from the water, restrain its movement by putting pressure on the pectoral fins (if enough support is available to assist you). Also use a stretcher.
"Take all photos of your catch quickly. By minimising your interaction time with the shark, you can improve its chance of survival.
"Children exploring rock pool are reminded to not pull octopus out from their hiding places under rock and to not leave any small fish caught in buckets standing in the sun.
'We bring you the latest Garden Route news'