Apocalyptic night of the Knysna fires 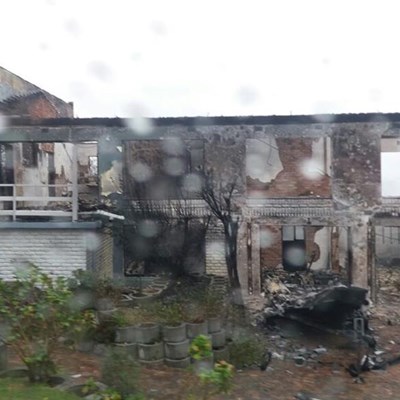 The remnants of a house after last night’s raging fire. Photo: Coenraad Troskie
KNYSNA NEWS - People from all over Knysna who were evacuated from their homes last night, Wednesday 7 June, gathered at the Knysna Yacht Club which opened its doors to those in need. Pets, families, folk from as far afield as White Location to Belvidere gathered in a surreal atmosphere watching the fire burning on either side of the estuary.

The floor became a bed to those who stayed the entire night. Surreal is the only way to describe the atmosphere as people helped each other, encouraged each other and even made jokes.

The biggest worry for most was that they had not rescued their passports, others thought of sentimental items like photographs. One women remembered a brand new jacket she had bought. People joked about their entire lives being wiped out from birth certificates, to their qualifications to all the important documents they owned.

For some that has come true today.

One man joked that he hoped the whole of Knysna was not insured by the same company and another person chipped in and said that most insurance companies do not cover natural disasters.

Tessa Jones and her husband Andrew who were at the Yacht Club last night, went home in the early hours of this morning to find they had lost their entire home in Eastford, burnt to the ground. It is also believed that founder member of the Simola Hillclimb, Chick Ramsay, lost his house also in Eastford.

An update will follow shortly from the fire chief, Clinton Manuel.