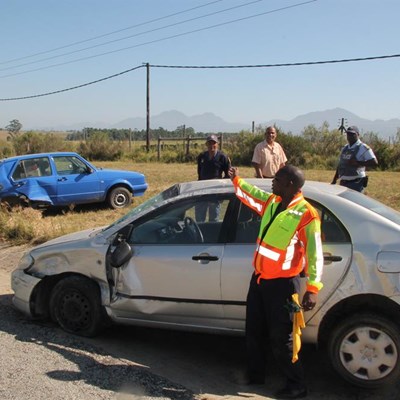 This Silver Toyota Corolla in the foreground drove into the stationery blue Citi Golf. Photo: Myron Rabinowitz
GEORGE NEWS - A driver who abandoned a blue CAW-registered Volkswagen Citi Golf on the side of the R102 airport road yesterday morning (14 April) near the turn-off to the Outeniqua Research Farm, is in for a big surprise.
The driver of a Toyota Corolla, travelling in the direction of George, rear-ended the stationery Citi Golf, shunting it off the road onto the grass verge at around 11:00.
The driver of the Corolla, an elderly gentleman, was unharmed but was taken to the hospital by the emergency services for shock.
A provincial traffic officer who was directing traffic past the accident scene, said, "We were patrolling the R102 airport road this morning at around 08:15 and saw the blue Citi Golf abandoned on the side of the road about 300m from the turn-off to the Outeniqua Research Farm.
I don't know who or where the owner is or whether the car broke down or ran out of petrol, but he or she will get a fright when collecting the car."
ARTICLE AND PHOTO: MYRON RABINOWITZ, GEORGE HERALD JOURNALIST
'We bring you the latest George, Garden Route news'