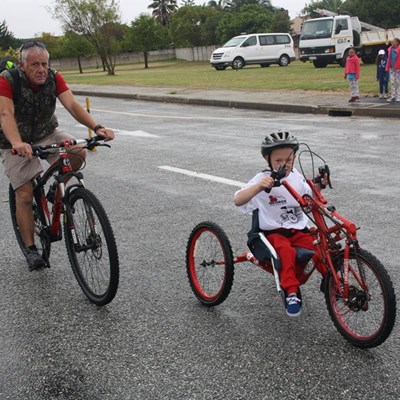 Zach Legward on his handcycle during the 10km race at the OCC. His dad, Geoff, accompanied him on his bicycle. Photo: Alida de Beer
GEORGE NEWS - Seven-year-old Zach Legward astounded onlookers at this year's Outeniqua Wheelchair Challenge by completing the 10km race.
He was on his handcycle built from two BMX bicycles by his dad, Geoff, an extreme sportsman.
"Getting the medals and passing other athletes in the race were the best parts of the OCC," says Zach, giving away an extremely competitive spirit that one would at first glance not associate with his tiny figure. Not once during the race did Zach think of giving up - despite the rain. And that night he was up and down the road again while playing with a friend where they stayed over in Albertinia on their way home to Cape Town.
Zach's legs were paralysed after he was born with his intestines outside his stomach, a condition called gastroschisis. He was a premature baby weighing 2,3kg and during an operation performed to correct the gastroschisis, his intestines were perforated, leading to gangrene of the stomach.
The infection spread to his lower spine, which caused the paralysis.When he was eventually released from hospital five months after birth, he weighed a mere 2,6kg. Starting life with such a massive setback did not deter Zach from a life lived to the full, but rather spurred him on to become a very determined little boy. Perseverance is also encouraged at home, and this shone through in his first ever race at the OCC, which he tackled only eight months after getting the handcycle from his dad.
"Zach has two wheelchairs, but hates them. He leopard crawls faster than anyone I have seen. One minute he is there, and the next, gone. He also walks on his hands with absolute ease, down and up stairs too. Hence his shoulder build. Ernst van Dyk (SA handcycle champion) even commented on the size of his chest and shoulders."
Zach inherited his dad's adventurous spirit and loves skiing, riding quad bikes and scuba diving (on Geoff's back). "He swims like a fish, takes part in archery, flies radio controlled planes, fishes and enjoys his surfboard with a jetski motor in it.
Like all kids he plays computer games and is super computer literate," says his proud father.
Zach says he is "definitely" returning for next year's OCC and for that, his dad is planning to build him a much lighter, racier handcycle.
It took Geoff and a colleague three months to build the first one out of pieces cut from two BMX bicycles, a kid's car seat, custom-made pedals and special brakes.
"We downloaded images from the internet, cut, welded, re-cut, modified and scratched heads, but eventually Zach had his cycle, although too heavy at 13,4kg."
It cost about R7 500. The alternative was to import one at a cost of at least R30 000.
Zach is looking forward to tackling his next OCC in a new version that will look like Ernst van Dyk's, but just much smaller. It should weigh about 5kg and is sure to help Zach improve his time. Watch out for this little competitor.
ARTICLE: ALIDA DE BEER, GEORGE HERALD JOURNALIST
'We bring you the latest George, Garden Route news'