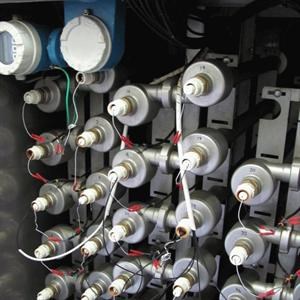 The milk comes out of the cows sterile at 37 degrees then passes through the photo-purification machine. This machine consists of 40 tubes, each with a lamp emitting UVC band light (a microbiocidal wavelength), and 1000 joules is passed through the milk in each of the 40 tubes which deactivates any bacteria before the milk is cooled to 4° Celsius in the holding tank.
airnbrogie Farm is home to a small dairy doing great things. As part of the recently formed Milk Independent brand, Andrew Hill’s dairy herd is producing the world’s first photo-purified raw milk.

"People have forgotten what milk is supposed to taste like," said Hill. "For people to be able to drink milk with all the enzymes intact is so exciting."

Hill first became interested in raw milk after recent droughts in the Southern Cape. The milk price offered by buyers plunged and, even with sensible farming practices in place, the production costs outweighed the buying price. Hill began his investigation into raw milk as a possible way to add value to his product.

International health and safety legislation requires that milk be pasteurised. However, there is a wealth of research showing that raw milk is nutritionally superior, containing the eight essential amino-acids as well as proteins, carbohydrates, fats, vitamins, minerals, enzymes, good cholesterol and beneficial bacteria. Few people are aware that unprocessed, raw milk from grass-fed cows was actually used as a medicine in the early part of the last century.

Potential threats in milk are the presence of e-coli and salmonella. Hill needed to find a way to treat the milk to make it safe for consumption without losing the health benefits of raw milk. He stumbled upon photo-purification being used successfully in the wine industry and became convinced that the technology would have similar success in the dairy industry. He was willing to take the risk. Gawie Vos, of the Bitou Health and Safety Department was approached to grant permission for testing to take place. After 36 weeks of testing it was obvious that the technology worked. Johan Compion, Eden District Manager of Municipal Health and Environmental Health Services was shown the test results, and a three- month trial period was granted for the Bitou area, in order to prove that these standards could be maintained. Very recently (only some days ago) the photo-purification process received FDA approval in the USA.

The milk has been available at Mellville Spar since December 1, 2010 as well as a number of local restaurants. At the end of January, Compion expanded the permitted sales area to include Heidelberg and Storms River, and Cairnbrogie is in the process of an aggressive roll-out to these areas.

Stringent procedures are adhered to in order to ensure milk safety. The milk comes out of the cows sterile at 37° Celsius, and then passes through the photo-purification machine. This machine consists of 40 tubes, each with a lamp emitting UVC band light (a microbiocidal wavelength), and 1000 joules is passed through the milk in each of the 40 tubes which deactivates any bacteria before the milk is cooled to 4° Celsius in the holding tank. Bottles are steam-cleaned before bottling and the bottling plant and dairy are treated with an ozone generator emitting trioxygen which creates an atmosphere in which no bacteria can survive. Hill does not have any plans to diversify as yet: "Just fresh, full-cream raw milk," smiled Hil,l but he does have big plans for the Cairnbrogie brand.

Cairnbrogie Farm donates 25 litres per week to The House of Hope in Kranshoek, which feeds up to 200 children a day. Hill dreams of seeing every child in Bitou receiving 250ml of raw milk daily, which he has no desire to profit from, although the production and distribution costs are estimated at around R3 per unit.

To read more about the health benefits of raw milk visit www.raw-milk-facts.com. For further information on Cairnbrogie Farm’s milk, call Andrew Hill at 082 441 4638 or visit www.cairnbrogie.co.za.

Andrew Hill of Cairnbrogie Farm, a small dairy with a big heart.

Raw milk is nutritionally superior. Few people are aware that unprocessed, raw milk from grass-fed cows was actually used as a medicine during the early 1900s.
Posted on: 07:11 Thu, 10 February 2011