BUSINESS NEWS - Google parent Alphabet shares lifted Monday on a stronger-than-expected earnings report for the past quarter, as the tech giant's results eased concerns over huge fines imposed by the European Union for antitrust actions.

Profit dipped 9.3 percent to $3.2 billion in the second quarter after accounting for the EU fines, the company said.

Revenues meanwhile jumped 26 percent from a year ago to $32.7 billion, better than most analysts expected.

Shares in Alphabet jumped 3.6 percent to $1,254.12 in after-hours trade, which could mark a new record for the internet giant if confirmed when markets open Tuesday.

"Our investments are driving great experiences for users, strong results for advertisers and new business opportunities for Google and Alphabet."

Last week, EU officials slapped a 4.34-billion-euro ($5 billion) penalty on the US tech giant for illegally abusing the dominance of its operating system for mobile devices.

Without the fine - which is being appealed by the company - profit would have been $8.3 billion.

Brussels accused Google of using the Android system's near-stranglehold on smartphones and tablets to promote the use of its own Google search engine and shut out rivals.

Daniel Ives of GBH Insights said in a research note that despite some regulatory concerns, "advertising and 'bread and butter' search revenues were healthy and a good barometer of potential strength heading into the rest of 2018/2019."

The future of the Android mobile operating system - which powers more than 85 percent of smartphones - has been clouded by the EU action, which could force Google to change its business arrangements with device makers.

Google chief executive Sundar Pichai said that it was too soon to speculate on how Android may be affected by the ruling but said the company would take a "constructive approach."

"We look forward to finding a solution that preserves the enormous benefits of Android to users," Pichai told analysts after the earnings release.

Following a reorganization of the company, the Google unit that includes the main search engine and YouTube video service still delivered the lion's share of revenues at $32.5 billion, with "other bets" driving $145 million in revenue.

Within Google, advertising remained the key revenue source, pulling in $28 billion in the three months ending in June, a 24 percent rise from a year ago. 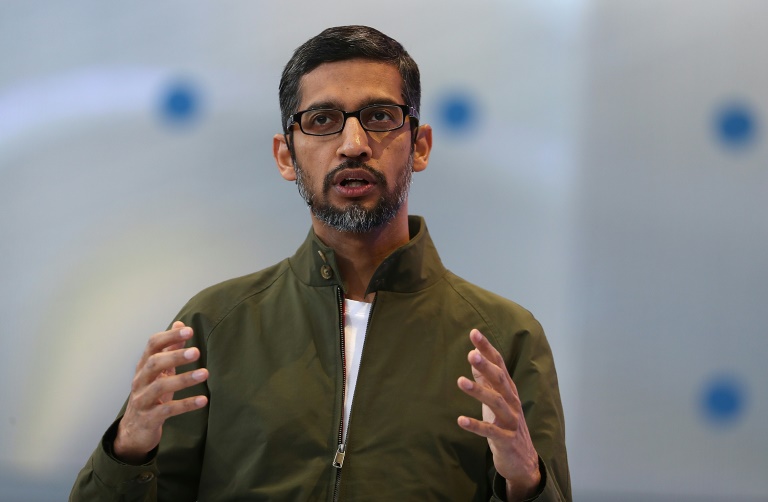 Google CEO Sundar Pichai said that despite a huge EU fine over its Android operating system, the tech giant hopes to "preserve the enormous benefits" of the mobile platform.

Although advertising remains the key driver of revenue, Google has been moving into cloud computing services for businesses, artificial intelligence and devices, including its Pixel smartphones and notebook computers.

As it ramps up artificial intelligence efforts, Google is in fierce competition with rivals such as Amazon and Microsoft in the market for voice assistants that are powering the next generation of connected devices including appliances, cars and smart speakers.

Alphabet's "other bets" saw a 49 percent jump in revenues from a year ago they still lost money, with an operating loss of $732 million in the past quarter.

The other bets include the self-driving car unit Waymo and the life sciences division Verily. Alphabet recently "graduated" two of these projects to be independent operating units, the Loon internet balloon service and Wing drone delivery.

Alphabet ended the quarter with cash reserves of $102 billion and saw its employee headcount rise to 89,000 from 75,000 a year ago.