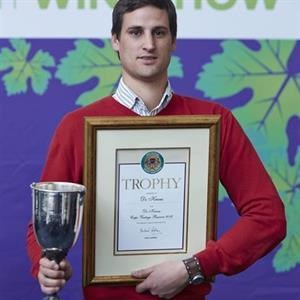 Louis van der Riet, De Krans winemaker, proudly displays the Old Mutual Trophy Wine Awards.
SOUTHERN CAPE BUSINESS NEWS - De Krans Wine Cellar in Calitzdorp has again showed why its port wines are highly regarded. The Cape Vintage Reserve Port 2012 was awarded the Tony Mossop Trophy for the Best Port In South Africa at the 2015 Old Mutual Trophy Wine Show. The results were announced on 27 May at the Mount Nelson Hotel in Cape Town.
This port was the only one to receive a gold medal at the competition that was judged by a panel, which included several highly esteemed international judges. An older vintage, the De Krans Cape Vintage Reserve Port 2007, was the only port to receive a silver medal at the same competition. Last year the De Krans Cape Vintage Reserve 2011 was awarded the coveted Best Port title.
A total of 1 082 wines from across South Africa were entered, with only 32 wines receiving gold medals - trophies. The De Krans Cape Vintage Reserve Port 2012 was produced in the traditional way, using the classic port varietals, namely Touriga Nacional, Tinta Barocca and Tinta Roriz.
Winemaker Louis van der Riet believes that this superb port will reach its full potential within the next 20 to 30 years.
The same port was also awarded a 5-star rating in the authoritative and internationally recognised Platter's by Diners Club South African Wine Guide 2015 (the 10th consecutive 5-star rating for De Krans), and was recently named as one of the Top 100 Wines in South Africa. Not stopping there with its list of accolades the 2012 vintage was also named SA Champion Port at the SA Young Wine Show in 2012.
According to De Krans co-owner Boets Nel, winning the sought after trophy for the second consecutive year has extra special meaning to him, because not only is it dedicated to Tony Mossop who was very influential in the port industry, but he was also a close friend of Nel's.
For more information on De Krans and its range of ports and wines visit www.dekrans.co.za
'We bring you the latest Garden Route, Klein-Karoo, Hessequa news'