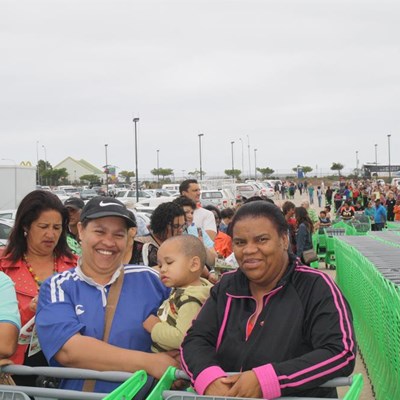 The Checkers Hyper queue stretched right up to the boundary fence of the parking lot. Photo: Pauline Lourens
GEORGE BUSINESS NEWS - The opening of Eden Meander Lifestyle Centre Phase 2 on Thursday last week was followed by a constant stream of thousands of customers over the weekend.
It was obvious that the opening specials of the main anchor tenant, Checkers Hyper, attracted the bulk of the feet. Customers started queuing early morning and at one time the queue stretched to the boundary fence of the choc-a-block parking lot. Even on Sunday, the shop aisles were jam-packed.
Centre Manager Maggie Avery says they were extremely pleased with the opening weekend and most shops in the centre have exceeded their targets. "A few of the 45 shops have not opened yet, but by 1 December they will be trading."
George Mayor Charles Standers, who cut the ribbon, said despite the challenging economic times, "the sceptics and critics were silenced" with the opening of the centre.
"Not only has it already ignited economic growth through employing 450 contractors in the construction process of which 70% were local, it also unlocked 750 permanent employment opportunities at all levels. It already draws shoppers from around the region and is paving the way for economic sustainability."
A director of Laritza Investments, Tibo Terblanche, praised the mammoth effort of all role players to make the R360-million development a reality. It was a decade ago that the dream was born when Garden Route Mall Investments contacted Cumulus for a joint venture. Together they formed Laritza Investments to give life to Eden Meander.
He praised the construction companies, Semper Prima and Marsilio Projects that made the deadline despite 48 rain days since October last year when construction of the 30 000m² centre began. He said together with the Garden Route Mall's 52 000m², shoppers in the Southern Cape now have 82 000m² of retail space between the two centres.
The builders are carrying out the finishing touches on the exterior, but according to Avery, they will be off site by 1 December.
View a photo gallery here.
Click here for previous articles: John Dory's staff on opening day. From left are: Elvis Presley (sushi chef), Steffie van der Merwe and Mpho Mapatsi (managers) and Brett Pienaar (operator). They worked until 02:00 to make sure they would be ready for their first customers on opening day. The developers of Eden Meander in front of one of the entrances after the official opening. From left are: Chris Roodt, Gerrie Cronjé, André Bauermeister, Tibo Terblanche and Loot Steyn. Photos: Alida de Beer