Coronavirus: The biggest economic risk is not China

BUSINESS NEWS - The current period of economic growth in the USA is the country’s longest since the mid-1800s. The US economy has now been growing consistently for almost 10-and-a-half years.

However, while the length of this expansion is unmatched, its rate is less impressive.

“It is the weakest since records began,” notes the chief economist at Schroders, Keith Wade.

“In this expansion, the average growth rate has only been 2%. That is a lot less than we’ve seen in previous expansions. Back in the 1960s, you had expansions of around 5% per annum.”

Partly, as Wade explains, this is because productivity growth since the great financial crisis has been disappointing. However, the main factor is that the US consumer has not been as influential as in the past. 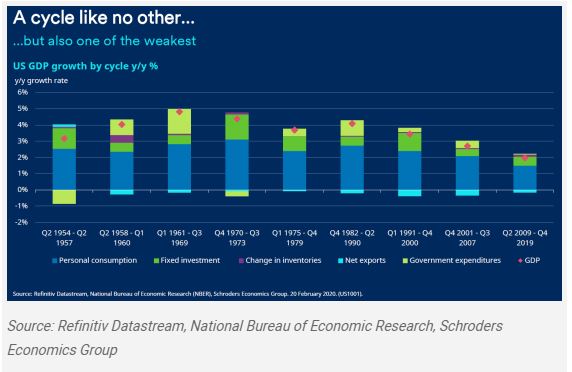 Consumer weakness
“Consumer spending is always the main driver of economic activity,” says Wade. “It always makes up around 70% to 80% of growth.”

In this cycle, however, it has been far weaker than in any other expansion since the 1950s.

“It’s not difficult to explain why,” Wade says. “The great financial crisis saw a major change in consumer behaviour.

“Suddenly, people found that they couldn’t borrow, or didn’t want to borrow. They had overextended themselves.”

Household debt, which is an important factor feeding economic growth, has therefore actually declined sharply over this period, instead of going up as one would usually expect that it would.

“As a percentage of GDP, household debt has been falling for 10 years,” Wade points out. “We have never had a period where people have deleveraged for so long.”

A viral problem
This is a significant consideration when analysing the potential impact of the coronavirus Covid-19 on the world economy. As MSCI argued in a recent investment note:

“The global spread of Covid-19 is already affecting global growth.

“Disruptions in the global supply chain and decreased consumption affect companies’ earnings in the short term. Combined supply and demand shocks could lead to a severe short-term decrease in GDP growth.”

The focus of this impact has primarily been in China, which is where the virus originated. Figures on car sales in the country published this week, for instance, show an 80% decrease for February this year.

Other data also reflects the severe slowdown in economic activity in China. The following graphs illustrate how the usual rebound in activity that usually follows the Chinese New Year has almost been entirely absent in 2020. 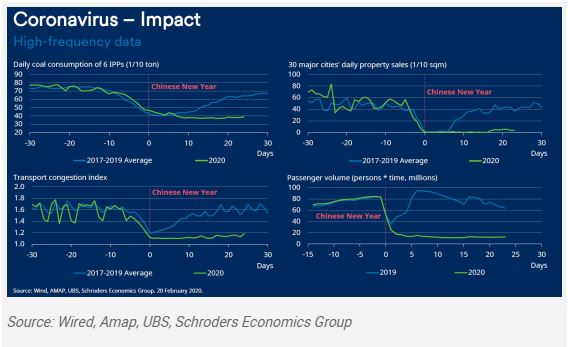 However, the impact is far from limited to the Chinese economy alone.

The UN Conference on Trade and Development (Unctad) published a special issue of its investment trends monitor on Sunday revealing that more than two thirds of the multinational businesses in its Top 100 have issued statements about the impact that coronavirus is having on their operations.

“Many are slowing down capital expenditures in affected areas,” Unctad notes. “In addition, lower profits – to date, 41 have issued profit alerts – will translate into lower reinvested earnings.”

The big concern
That illustrates the global impact that it is having. The ultimate question, however, is how much this will extend to the US consumer.

“If the US consumer is weak, the US economy is weak, and the global economy tends to be weak,” explains Wade. “Because we don’t have any other major drivers of economic activity. People often say that China is a major driver of economic activity, and it is in many sectors. But a lot of what China relies on is demand from the US. China itself doesn’t tend to drive a lot of overall activity.”

How significantly Covid-19 impacts US consumer spending is therefore going to be critical.

“We’ve often described the world economy as a bit of a wobbly bike,” Wade says. “It’s not actually moving very quickly, and if it hits a shock it’s likely to fall over.

“That is, in a way, how we are thinking about coronavirus,” he adds.

“We’ve had a big shock and a number of economies are going to roll over as a result of that. So there is this risk of global recession. If the coronavirus continues and it does spread to the US, then the world economy as a whole is really going to struggle.”