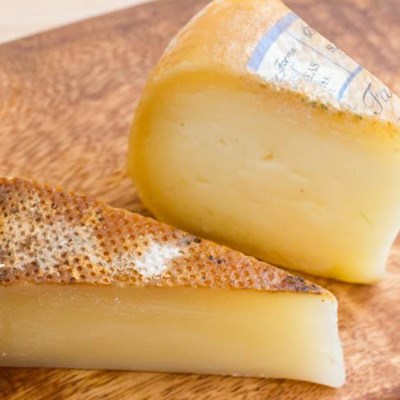 When Wieger Kuiken and Dineke van der Laan bought the 21ha farm Groot Kabel from Wieger’s parents in 2007, they had already made a firm decision: they did not want to continue with cow milk production as Wieger’s parents had done. The main reason was the relatively low prices paid by the local cooperative.

Instead, the couple, who had started milking sheep in 2004, were determined to introduce dairy sheep on the farm. Since then, they have built up a thriving sheep milk cheese business on Groot Kable, which is situated in Kollumerpomp in the Dutch province of Friesland.

An unusual product
Although Wieger and Dineke regarded farming dairy sheep as challenging, they also saw an opportunity to do value-adding by making cheese. Moreover, to set them further apart, they would do so organically. Sheep cheese is highly nutritious, a fact seemingly long recognised in the old Spanish proverb: “Cheese from the ewe, milk from the goat, butter from the cow.”

Although sheep milk yield is far lower than that of cows or goats, it is richer in solids such as fat, protein and minerals, and is therefore ideal for making cheese. Sheep milk cheese is richer in vitamins A, B, and E, calcium, phosphorus, potassium, and magnesium than cow’s milk cheese. It also contains more conjugated linoleic acid – a cancer-fighting, fat-reducing fat. In addition, the cheese also contains more short-chain fatty acids which are easily digestible and have little effect on cholesterol levels.

The high solids content in sheep milk means it is able to be frozen and stored until sufficient quantities are available to make cheese, and freezing will not affect the cheese-making qualities of the milk. But there is another difference that’s crucial to the dairy producer: you get more from less. To make 1kg of cheese requires about 10l of cow or goat milk, but only 5l of sheep milk cheese. According to some sources, 10kg of goat or cow milk yields only 9% to 10% cheese, whereas the same quantity of sheep milk will yield 18% to 25% cheese.

On Groot Kabel, Wieger and Dineke require only 5,8l of sheep milk to make 1kg of cheese, while their sheep milk contains 5,5% protein and 6,5% fat.

Dineke van der Laan in Groot Kabel’s farm shop. The shop sells the farm’s products to visiting tourists.
Production figures
The Groot Kabel herd consists of 175 sheep, of which 150 are ewes in milk at any given stage. Wieger and Dineke farm Friesian dairy sheep, but introduced the Tesselaar mutton sheep for cross-breeding in order to produce a small percentage of slaughter lambs. The Friesian milk sheep is not a fat animal and has no wool around the tail. According to Wieger, they are relatively small, but are fertile and have good udders. At one week old, a cross-bred lamb fetches €10,00* (R130). The price rises to €80 (R1 050) for a 35kg to 40kg lamb.

“We use some of the pure Friesian lambs as replacement animals for the dairy sheep,” says Wieger.

The farm has three rams. According to Wieger, a good ram costs about €250 (R3 300) in the Netherlands. The older sheep lamb once a year in January or February, while the yearlings lamb in April.

Milk yield
Sheep in the Groot Kabel herd have three to four lactations during their lifetime, and the couple milk the sheep from February until mid-November. This is done twice a day in a 20-point milk parlour. The average yield is 350l milk/sheep/year, and the total annual yield for the herd is 52 500l. At the beginning of a lactation, the average yield is 2,2l/ sheep/day. This figure declines to 0,8l/sheep/day by the end of the lactation.

Higher production costs
According to Wieger, sheep milk operations are more difficult to manage than goat milk operations. This he ascribes primarily to: Lower milk production (350l to 400l/sheep/ year versus 800l to 1 200l/ goat/year); The greater amount of manual labour and time that is required to milk sheep. This is due mainly to the fact that there is not an automatic cluster remover for milking sheep.

Value-adding variety
Cheese-making is Wieger and Dineke’s most important income stream. Sales of lambs and sheep to the meat industry come second and this is followed by small quantities of sheep milk. The couple sell their cheese to several clients: a wholesaler in the Netherlands, another in Belgium, several supermarkets and at their farm shop to tourists. The fact that they are certified organic by Skal, the only inspection body for organic production in the Netherlands, gives them another marketing edge.

They sell their cheese at an average price of €11,00/ kg (R145/kg) to wholesalers and €13,00/ kg (R170/kg) to supermarkets.
“We make cheese three times per week – on Mondays, Wednesdays and Fridays. We produce two sizes: 300g for tourists [visiting the farm] and 4,5kg for wholesalers and supermarkets. In addition to naturally flavoured cheeses, we also make speciality herb-flavoured cheeses.”

Sheep cheese is usually associated with Feta from Greece, Italy and France; Roquefort from France; Ricotta and Pecorino Romano from Italy; and Manchego from Spain. However, Groot Kabel produces a Gouda-style cheese, for which the Netherlands is renowned.

The taste depends on the length of the maturing process. Dineke explains that young Gouda cheese is soft and creamy, while Gouda that has matured for three months is harder and tastier. “We use raw milk which has only been heated to 32°C for our more matured cheese and this cheese shows more of the sheep milk character; it’s sought-after among cheese connoisseurs.”
However, she adds that there is currently more demand for the farm’s younger cheese.

Niche target market
Sheep milk products are niche products targeted at consumers in search of something unique. According to statistics released by the Food and Agriculture Organisation of the United Nations in 2012, only 1,3% of the world’s total milk production came from sheep in that year.

Worldwide, sheep milk is mostly used for making cheese. It is an industry that dates back thousands of years and is even older than the cow’s milk cheese industry. It is concentrated mainly in Europe, particularly in the Mediterranean countries.
Input costs and the bottom line

The current cost of agricultural land in the Netherlands is approximately €50 000/ ha (R656 000/ ha). Groot Kabel’s highest input costs are interest repayments on the 25-year loan that Wieger and Dineke took out to purchase the farm. According to Wieger, the interest rate (in December 2014) is 2,8%, but he and Dineke receive a 1% reduction as they farm organically. They pay €0,50/ kg (R7/kg) for organic/biological concentrate, and feed the sheep 0,5kg concentrate per litre of milk produced per day.