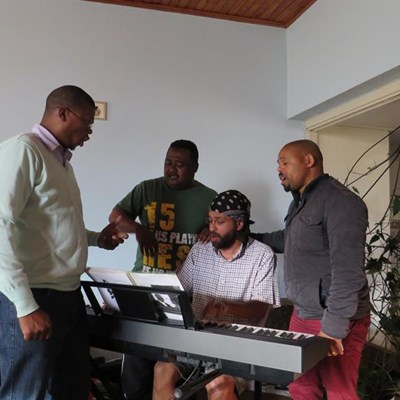 Ashley Rhoode, Daniel Williams and Ashley Ruiters - better known as Uniscent Vocal Band, rehearse gospel songs with Voldi George (middle seated) with great verve and style. Photo: Pauline Lourens
GEORGE NEWS - Popular tenor, Voldi George, who is also well-established as a versatile entertainer, has turned another page in his musical career.
On Sunday 2 October he performed well-loved gospel songs with professional George singers Ashley Rhoode, Daniel Williams and Ashley Ruiters - better known as Uniscent Vocal Band. The group harmonises well and hope to have many more shows together.
While listening to the group during an intense rehearsal at Voldi's house in Lavalia last week, I was bowled over by their passion, verve, and smoothness of the melodies they sang.
They performed this on Sunday at the Assemble of God Church in Rosemoor, and the audience enjoyed a great performance because the group has been in rehearsals since April this year, and their hard work paid off. They do acapella numbers, but sound equally fabulous when accompanied by keyboard. Voldi, who has had formal training in piano and violin, is proud to be a Georgian.
He has performed for audiences across the nation, including at KKNK, Nederburg Arts Experience, the George Society of Arts, the George Music Society, the South Cape Children's Choir, the George Male Choir and the first South African Idols competition where he reached the top 50.
Over the years his versatility manifested in cross-genre collaborations with classical musicians and rockers alike.
While working in the US, he developed a penchant for jazz and incorporates operetta into his growing repertoire.
He is energised by his collaborating with Uniscent and together they are magic. The group has an upbeat tempo bringing a special touch to numbers like Pretty little Jesus and Still with Thee.
ARTICLE AND PHOTO: PAULINE LOURENS, GEORGE HERALD JOURNALIST
'We bring you the latest George, Garden Route news'