Victoria's Secret apologises for use of headdress 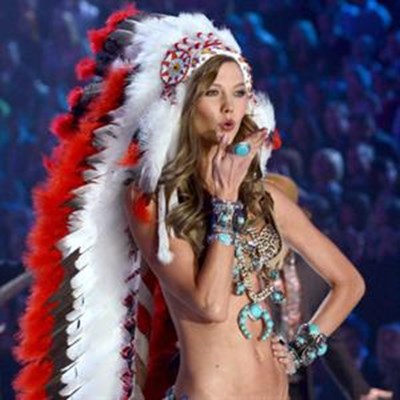 Victoria's Secret model Karlie Kloss walked onto the runway last week wearing the floor-length feathered headdress, leopard-print underwear and high heels.
INTERNATIONAL NEWS - Victoria's Secret has apologized for putting a Native American-style headdress on a model for its annual fashion show, after the outfit was criticized as a display of ignorance toward tribal culture and history.

The company responded to the complaints over the weekend by saying it was sorry to have upset anyone and that it wouldn't include the outfit in the show's television broadcast next month, or in any marketing materials.

"We sincerely apologize as we absolutely had no intention to offend anyone," the company said.

Historically, headdresses are a symbol of respect, worn by Native American war chiefs and warriors. For Great Plains tribes, for instance, each feather placed on a headdress has significance and had to be earned through an act of compassion or bravery. Some modern-day Native American leaders have received war bonnets in ceremonies accompanied by prayers and songs.

"When you see a Lakota chief wearing a full headdress, you know that he was a very honorable man. He was a leader. He did a lot of honorable things for his people," said Michelle Spotted Elk, a Santa Cruz, California, woman of mixed heritage whose husband is Lakota. "It also has religious significance. With them, there's not a division between spirituality and their leadership."

Victoria's Secret model Karlie Kloss walked onto the runway last week wearing the floor-length feathered headdress, leopard-print underwear and high heels. She also was adorned with fringes and turquoise jewelry during a segment meant to represent the 12 months of the year - fireworks in July, rain gear for April and a headdress for November.

Kloss herself posted on Twitter that she was "deeply sorry if what I wore during the VS Show offended anyone."

Thousands of people have commented about the outfit on the company's Facebook page. Some praised Kloss' attire as artistic and urged those offended by it to "get over it." Several expressed appreciation to Victoria's Secret for halting its marketing of the clothing, and others reached back in history to explain their feelings.

"We have gone through the atrocities to survive and ensure our way of life continues," Navajo Nation spokesman Erny Zah said in an interview Monday. "Any mockery, whether it's Halloween, Victoria's Secret - they are spitting on us. They are spitting on our culture, and it's upsetting."

The Victoria's Secret stir follows a string of similar incidents. Paul Frank Industries Inc. and the band No Doubt ran into criticism earlier this year for their use of headdresses in clothing and parties, and in a cowboys-and-Indians-themed video, respectively. They offered apologies as well.

Last year, Urban Outfitters Inc. set off a firestorm of criticism with its line of Navajo-branded clothing and accessories - particularly underwear and a liquor flask, which the tribe said was "derogatory and scandalous."

Abaki Beck was among a handful of Native American students who hosted a discussion last week at a private liberal arts college in St. Paul, Minnesota, on Native American culture in fashion and sports. She said companies first must learn from the mistake of ignoring Native American history and then make an effort to engage with Indian Country.

She wanted more than a short apology from Victoria's Secret instead of what she said sounded like an automated response.

"But perhaps that is an unrealistic hope," said the 19-year-old member of the Blackfeet Nation of Montana. "It is all about business, after all."

Jennie Luna, who is Chicana and Caxcan, said society largely is ignorant toward indigenous spirituality and doesn't understand what should not be marketed commercially. She and others say more education about Native American cultures is needed.

"We are people; we're not a fashion statement," Luna said. "We are people who are facing serious issues, and for them to further perpetuate the type of stereotypes and disregard for a community's way of life is unacceptable."

ReGina Zuni's advice to companies looking to market Native American culture is to hire Native Americans who have knowledge of tribal traditions, cultures and customs.

However, her reaction to hearing about the Victoria's Secret headdress wasn't outrage about the clothing itself, but about the lack of attention on health care, education, housing and other issues in Indian Country.

"To each his own," said Zuni, of Isleta Pueblo in New Mexico. "But seriously, if people want to grab media attention on Indian issues, this is not the issue to advance and place in the spotlight."

Read more about: Victorias Secret apologises for use of headdress