‘We thought ‘vaccine celebration’ was a catchy name because as you know a lot of people are sceptical about the vaccine and there’s a lot of confusion.’

The promotion for the party.

ENTERTAINMENT NEWS - The country is opening up and event organisers are relishing at the easing of adjusted level 3 restrictions.

One such organiser is Mafu Mahada, owner of Mafu Island Resort in Brits, North West, who was hosting an event last Saturday.

Mafu says the planned festivities were part a celebration for the vaccine roll-out in South Africa and admitted their name of the event was chosen because it was “catchy”.

“We thought ‘vaccine celebration’ was a catchy name because as you know a lot of people are sceptical about the vaccine and there’s a lot of confusion. What we are saying, we are fully behind the government, we believe that the vaccine is going to make a difference and we don’t believe there is anything wrong with it, otherwise the government wouldn’t have procured it.”

He said they have no involvement with the vaccine roll-out or any support from the government.

With regulations stipulating that outdoor events should not exceed 100 people outdoors and 50 people indoors, Mafu was surprisingly unaware of the numbers remaining unchanged.

When told, Mafu replied: “That is a problem but we will decrease the numbers to 100 people.”

He concludes that “Vaccine Celebration” was also meant to mark their reopening, after they had to close their doors in December last year because of the rising Covid-19 numbers during the second wave.

The first 1.5 million doses of the Oxford-AstraZeneca Covid-19 vaccine arrived on Monday. Manufactured by the Serum Institute of India (SII), according to the government’s phased roll-out plan, healthcare workers would be prioritised in the first phase, followed by those with comorbidities and the elderly. 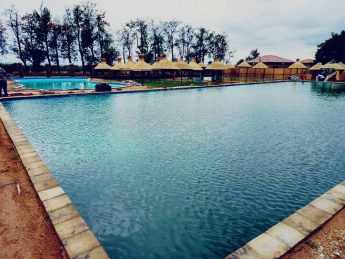