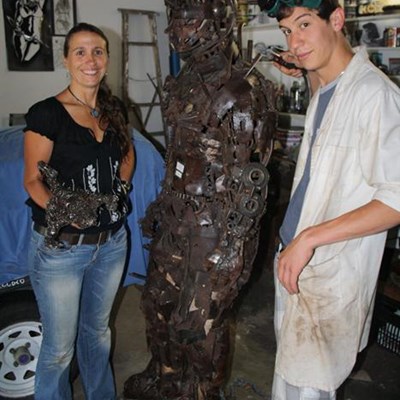 Monica and Roberto Vaccaro are elated that this young sculptor has been accepted to study at the Michaelis School of Fine Art UCT. Photos: Pauline Lourens
GEORGE NEWS - Local sculptor, Roberto and his mother Monica Vaccaro are thrilled to be so intricately involved with the Landmark Leopard and Predator Foundation.

His larger than life sculpted leopard, travelled to Robertson to help create awareness at the Landmark's presentation on Wednesday. The work comprises gin-traps and other metal pieces welded together.

The gin-traps used in his sculpture had been used within the Garden Route to trap and were confiscated by CapeNature and other animal protection organisations. The leopard which has a vulnerable trapped look about it, is being used by the Landmark Foundation at their various travelling exhibitions and presentations where its striking appearance helps create awareness of the importance of protecting these predators from extinction.

It is no coincidence that he embarked on a sculpting career. Monica, who had always had high hopes that her sons would be interested in taking up sculpting as a hobby, once asked their grandfather Vicenzo Vaccaro, who was also a metal craftsman, to give her young boys a lesson in welding.

The old man thought it an odd request but Roberto and his brother Ricardo (who will be studying LLB this year), were intrigued and made their first sculpt work - a ship which is displayed in their Heatherlands garden. Her initial idea was that it is important to be multi-skilled, but when she saw their handiwork she decided to encourage them to take things one step further.

She hoped they would also follow in their father's footsteps - a Wits fine arts graduate, the late Victor Vaccaro's and their grandfather who went from being an artisan to being a sculptor. Roberto's latest work Scar Tissue, an imposing work in mixed metal, caused a stir at an exhibition held at the Garden Route Mall where it went on show together with other local artists work as part of the George Municipality's Local Economic Development's annual arts exhibition.

Having taken a gap year to figure out what he wants to do has made him come up with practical career choices. He foresees that he could be earning strong overseas currency if he combines his love of rock climbing with welding, while working for oil rigs or other huge vertical projects.

In the meantime he is quite philosophical about his Sci-fi man entitled Scar Tissue which is going up for exhibition at 21 on Montagu Gallery and Design Studio in Blanco. Scar Tissue represents the 21st century man who is out of touch with himself. "He may look intimidating and abrasive but he is actually passive, a typical post apocalyptic creature that hides his vulnerability behind a macho front," explained Roberto who took two years to complete it.

To find the pieces to go into his 200kg mixed metal man, Roberto scoured local scrap metal dealers yards and this always proved highly exciting. Whether it be an exhaust pipe or pressure gauge - they all had possibilities to give structure and form to his man.

He has been accepted to study fine arts at Michaelis School of Fine Arts at UCT and now it is just a matter of waiting to hear whether his bursary has been approved.
Posted on: 06:00 Thu, 07 February 2013